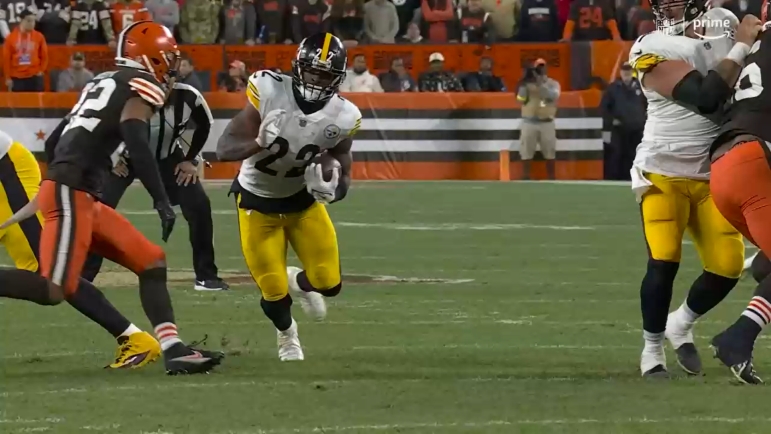 As a team captain who hasn’t performed up to expectations this season, Pittsburgh Steelers running back Najee Harris has gotten a lot of blame for the lack of success on offense. However, he has no problem with that, telling reporters today that he’s “all for it.”

“With winning and losing, there’s always somebody you gotta blame. If it’s that person that I gotta blame myself or people want to blame me, I’ll be here. I’m all for it. Not gonna blame nobody else, other than me,” Harris said via a video posted to Steelers.com. “If there’s any fingers to point, you can point them at me.”

Harris is doing the right thing as captain and not trying to blame his teammates or coaches for the Steelers’ lack of success this season, especially offensively. There have been moments of frustration, like when Harris said “I can’t make the hole” after the loss to the Eagles in Week 8. On the surface, it definitely sounds like he’s placing blame on the offensive line but Harris clarified those comments and is now making it clear that he’s accepting of blame.

Fair or not though, Harris does deserve a share of the blame for the team’s lack of success offensively. He’s averaging just 3.3 yards per carry and hasn’t been the feature back the team envisioned when they selected him in the first round last year. With a rookie quarterback, Harris was expected to carry the load and be a guy who could pick up chunk yardage and help move the chains. Instead, he’s been rather pedestrian this year, and while his preseason foot injury that lingered into the regular season and a subpar run-blocking offensive line have been hindrances, you’d still like to see Harris be better.

I think Harris will turn it on at some point in the second half of the season and hopefully he’ll be able to string together a few solid games in a row to reaffirm why Pittsburgh was so high on him. If he continues to struggle throughout the year, the calls for undrafted rookie Jaylen Warren to get more reps will only be louder, and there are going to be conversations about whether or not the Steelers made a mistake taking Harris and whether there needs to be outside additions in the running back room this offseason.

Despite all that, it is good that Harris is taking a leadership role here and making it clear that he doesn’t feel anyone else should be blamed for the offense’s struggles. Obviously, the blame should go around across the board, and Harris certainly isn’t worthy of all of it, but making it clear that he doesn’t want anyone else to be blamed is what leaders do. Despite the on-field struggles, Harris is a guy the Steelers count on off the field and in the locker room, and this is just another example as to why.