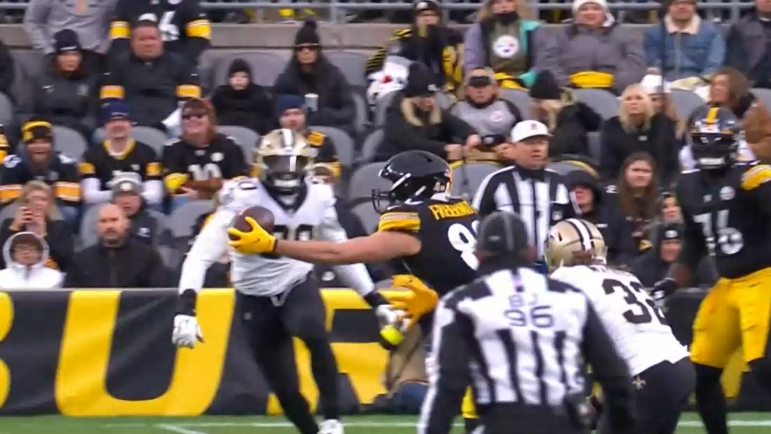 A 10-year tight end for the Pittsburgh Steelers, Heath Miller was a fan favorite for the entirety of his career. The duo of Miller and Roethlisberger produced two Super Bowls and many yards and touchdowns. After a few seasons of trying to replace Miller at the position after his 2015 retirement, the Steelers appear to have done so with Pat Freiermuth, who the team picked in the second round in 2021. On Monday’s episode of Footbahlin with Ben Roethlisberger, Miller was a featured guest. The two commented on Freiermuth and his relationship with his predecessor.

“He texted me before the game,” Miller said in reference to Freiermuth painting his shoes to honor him. “He gave me the heads up, and I was very honored.”

Miller is referencing Freiermuth’s decision to paint his shoes to honor his induction to the team’s Hall of Fame on Sunday’s game against the New Orleans Saints. For Freiermuth, there is perhaps no better example to follow than that of Miller’s, who was among the greatest tight ends in team history.

Steelers Nation was amazing today. Back on track. Had to rep the 🐐 of Pittsburgh Steelers Tight Ends today for being inducted into the Steelers Hall of fame! See Yinz next Sunday! pic.twitter.com/LxCQ6opCp1

Ideally for the franchise, 2022 first round pick Kenny Pickett and Freiermuth will be with the franchise for many years to come, emulating the aforementioned duo of Roethlisberger and Miller. Much like the latter, Pickett and Freiermuth were drafted in back to back years, and are very close in age and have an opportunity to be with the team for years to come.

“I get it,” Roethlisberger said in reference to Freiermuth’s respect for Miller. “It’s a guy your position that everyone knows. Now they’re starting to get the ‘Muth’, but every right end after you got ‘Heath’ chanted.”

Indeed, every right end after Miller mistakenly received the famous “Heath” chant This is a list that included Ladarius Green, Vance McDonald, Eric Ebron, Jesse James, among others. Given his status as a high draft pick and immediate impact as a young player, Freiermuth broke this cycle, earning a unique chant of his own.

The second-year tight end is arguably having a breakout sophomore season. He is among the most targeted players on the team, and his play in the middle of the field was in part the reason for the team trading away receiver Chase Claypool. For Pickett, having a security blanket in Freiermuth certainly won’t hurt his development, as was the case with Miller for Roethlisberger. Freiermuth had a chance to play with Roethlisberger in his last season before retirement, and the two seemed to get along well.