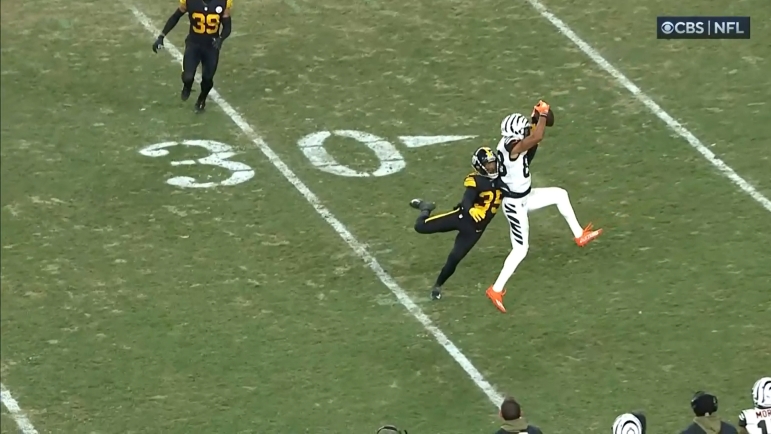 Holding a four-point lead early in the fourth quarter on the road Sunday inside Acrisure Stadium, the Cincinnati Bengals took over a crucial possession against the Pittsburgh Steelers from their own 7 yard line.

Eight plays later, the drive ended up in the end zone in what seemed to be relatively easy effort overall as quarterback Joe Burrow found backup running back Samaje Perine for the third time out of the backfield for a score.

“Did he get there? TOUCHDOWN!!”

The touchdown gave the Bengals a 34-23 lead in an eventual 37-30 win, giving the Bengals a much-needed win coming out of the bye week.

After the win over the Steelers in AFC North action, Cincinnati head coach Zac Taylor discussed the 93-yard touchdown drive with reporters, crediting the Bengals offense for handling the changes and different looks the Steelers tried to throw at Cincinnati in an effort to get off the field.

In the end, those different looks and multiple personnel substitutions didn’t work.

“I thought it was easy to call. I just felt like it was going our way,” Taylor stated to reporters regarding the eight-play, 93-yard drive, according to the official transcript provided by the team. “And there was a whole range of play calls we were engaged in there. And our guys really responded. I wouldn’t say we got consistent looks. You know, they were really changing up their fronts and coverages and playing different personnel groupings, even on second down. And I thought our guys did an awesome job managing that and allowing us to save some flow there without the third downs that we ran into.”

The Bengals certainly did a good job of dealing with the multiple looks and personnel that the Steelers tried to throw at them on the drive.

Right away though, Cincinnati took advantage of a matchup they liked at the snap as Burrow found wide receiver Tyler Boyd on a slot fade for 27 yards over Arthur Maulet. The very next play, Burrow found reserve wide receiver Trenton Irwin for a 32-yard catch and run, putting the Bengals inside Steelers territory rather quickly.

Trenton Irwin with a 32-yard play for the Bengals offense. It looked like Pittsburgh's D thought he went out of bounds with how slow they were moving

Later, Burrow found Boyd for 15 yards, and then the Bengals picked up 8, 5 and 2 yards on the ground before Burrow hit Perine out of the backfield from 6 yards out, putting the game out of reach.

Though the drive looked rather easy for the Bengals, the Steelers desperately tried to switch things up, disguise coverages and throw looks at Burrow and the Bengals that they hadn’t seen much of. In the end, it came down to execution and players making plays.

The Bengals made more plays on that drive than the Steelers, obviously, and it led to an 11-point lead that they’d never relinquish.