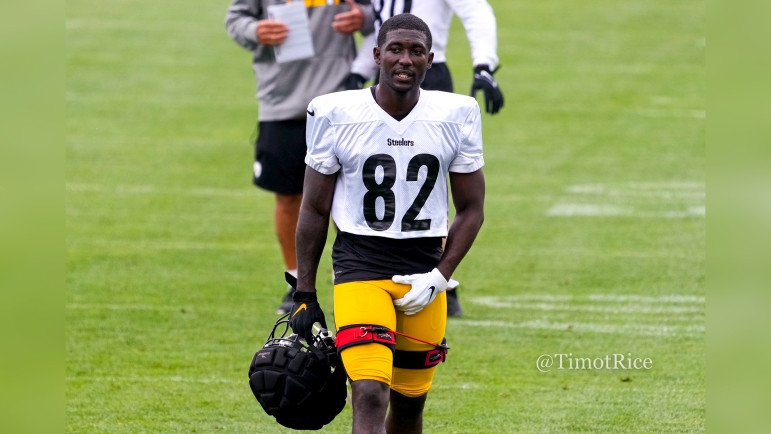 There aren’t many sub 5’9, 180-pound receivers who run 4.56 playing in the NFL. Sure, plenty of those guys try to go into the NFL pool. Few last, chewed up, spit out. Too small, too slow, too easily disregarded by coaching staffs in favor of those who are bigger, faster, and higher pedigree.

Steven Sims is the exception. Though he’s bounced around the league and had to scratch and claw for a chance, he has one heck of an opportunity the final nine games of the 2022 season. Speaking to reporters Monday, Sims said he embraces the underdog mentality.

“Since I was a young guy, always been like kind of underdog story,” he said via the team’s YouTube channel, “so that’s just my nature to work and wait my turn in a sense. It’s is normal to me, you know? Just always being counted out. Underdog, small guy…I just work and show up.”

Sims has worked while he waited. A two-star recruit out of high school, he had just one FBS offer and committed to the Kansas Jayhawks. Playing on some of the worst teams that program ever had, Sims won just six collegiate games, coupled with his small stature and slow 40 time, Sims went undrafted in 2019.

He signed with Washington as an UDFA and became a summer darling, making the team and having an impactful rookie season with four touchdown receptions and one kick return score. But the NFL takes as quickly as it gives and Sims’ role was reduced in 2020. By 2021, he was released in August, spending a week with the Buffalo Bills before being waived at final cutdowns. Pittsburgh scooped him up for their practice squad in 2021 and he’s worked his way up the ladder since, now poised for starting slot duties in the wake of the Chase Claypool trade. To date, he’s been used primarily in the return game, displacing Gunner Olszewski as the team’s starting kick and punt returner and immediately making splash plays there.

Counted out his whole life, Sims says he’s been beating the odds since his middle school days.

“Honestly, I remember my middle school coach telling me I would never be anything.”

As Mike Tomlin likes to say, it doesn’t matter how you got here. All that matters is you’re here. Sims is a Steeler, a starter, and could revive his NFL career with a strong second half of the season. He is Tomlin’s version of Corey Ivy, the plucky guy who didn’t have all the obvious tools but made plays and stuck in the league.