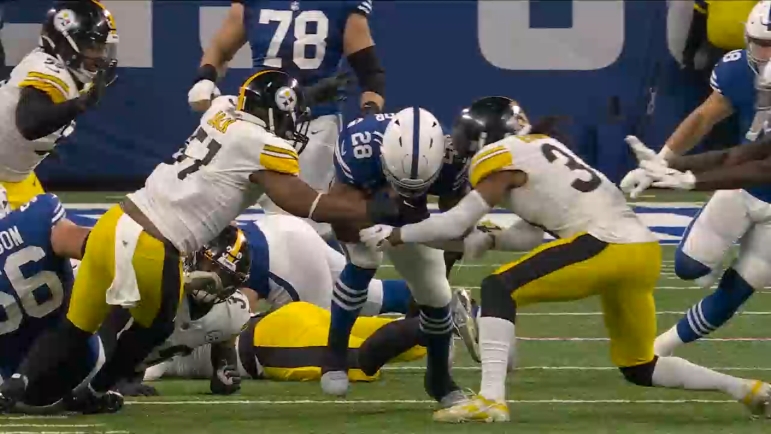 Coming into the Monday Night Football matchup with the Indianapolis Colts, much of the attention defensively for the Pittsburgh Steelers was focused in the backfield on Colts’ star running back Jonathan Taylor.

Taylor, who rushed for 1,811 yards and 18 touchdowns last season in an MVP runner-up season, hasn’t had quite the success he did in 2021 to this point in the season, but in primetime matchups in his career, Taylor was on a historic pace.

In primetime games, Taylor came into the Week 12 matchup averaging 103.7 rushing yards per game, putting him in elite company with O.J. Simpson and Barry Sanders as the only players to average more than 100 rushing yards per game in primetime matchups. Entering Monday night’s game, Taylor eclipsed 100 yards in all four primetime matchups, helping lead the Colts to a perfect 4-0 mark with an average score of 31-20.

With the emphasis on slowing down Taylor, the Steelers — for the most part – were successful, holding the star running back to 86 yards and a touchdown on 20 carries in the 24-17 win. Keeping Taylor in check — his longest run was just 13 yards — was crucial for the black and gold on the night. Overall, Taylor averaged 4.3 yards per carry.

Still, despite the success, third-year linebacker Alex Highsmith knows the Steelers must do a better of job of playing a full game after struggling to slow down Taylor in the third quarter as the Colts battled back from a 16-3 deficit at the half to take a 17-16 lead entering the fourth quarter.

“Yeah,  I felt like they came out and they were able to establish the run,” Highsmith said to reporters, according to video via the Steelers’ official YouTube page, regarding the third quarter. “I feel like we didn’t play as good in the second half and on the drives that they did score, Jonathan Taylor was running the ball really good. So, we just can’t ease up in that in that aspect, because I felt like we sat down the run very well in the first half. So we just gotta play a full game when it comes to that.”

The Steelers were concerned with keeping Taylor bottled up throughout the night, and to their credit he never busted off the long one, which was something every defender for the Steelers was worried about coming into the Week 12 matchup.

With the emphasis on stopping the run throughout the week, the Steelers certainly checked off that box in the win, keeping Taylor in check, forcing the Colts to turn to a passing attack that really struggled throughout the year. Veteran quarterback Matt Ryan had some success throwing the football in the second half, but in the end he still finished with just 199 passing yards.

As the Steelers kept Taylor in check, it turned the Colts into a mostly one-dimensional offense, which took away Indianapolis’ best weapon. That’s a win for the Steelers, and it showed on the scoreboard in the end.