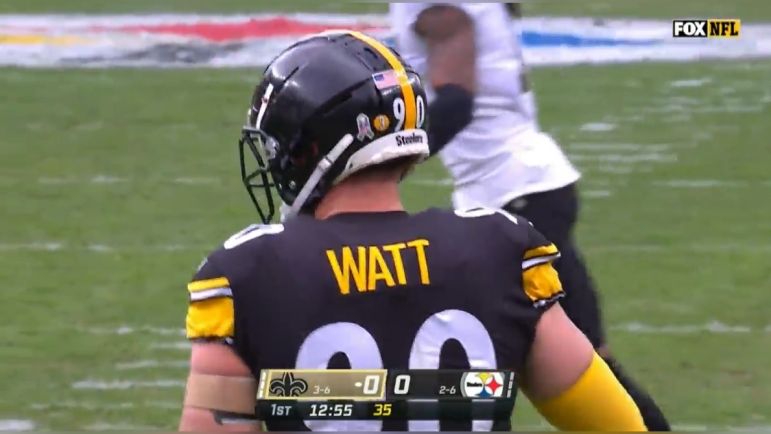 The Pittsburgh Steelers’ much-needed victory against the New Orleans Saints saw the return of reigning DPOY T.J. Watt, who the defense had missed immensely. Though his stat sheet did not pop out in his first first game back from injury, make no mistake on the impact of his return on the defense. When asked about said impact, linebacker Alex Highsmith, who plays opposite Watt, did not mince words.

“He brings so much energy to our lineup,” Highsmith said in a Wednesday interview when asked about what changed with Watt’s return according to Steelers Live on Twitter. “First play of the game and he’s back in there for TFL (tackle for loss) and so his presence has definitely felt and it was felt immediately in the Saints game. And so I know teams are preparing for that. And so it was just amazing having him back, you know, cuz he’s the guy who demands attention and stuff.”

In Watt’s only healthy game back in Week 1, he registered six tackles along with a crucial sack and interception. This performance galvanized one of the team’s best defensive outings this season, as they had seven sacks and four interceptions against a Cincinnati Bengals’ offense led by reigning AFC Champion quarterback Joe Burrow.
The team had eight sacks in the seven games following the Week 1 seven sack performance, which further captures how significant Watt’s absence was. The team moved to 1-8 without the star pass rusher during his absence, and his return will likely prove crucial moving forward. One player that particularly played better with Watt’s return was Highsmith.

“I just try to go out there and just be my best self,” Highsmith continued when asked how the return of Watt trickles down to him. “When I do get the chance to have those one-on-one ones, I’m just trying to take advantage, and make the most of them. But I just really just go out there and try to have a best self every game.”

Of Highsmith’s 8.5 sacks on the season, 5 have come in the two games he has played with Watt. In Week 1, Highsmith’s three sack performance was one of the best in his career to date. This is not to take away from Highsmith’s merit as a player, as he held his own as the team’s primary edge rusher with Watt gone. However, it is only natural for Highsmith to perform better with more one-on-one matchups that come from the attention that Watt requires on the other side.

Interestingly, according to Seth Walder of ESPN, Highsmith was not double teamed at a high rate relative to other edge rushers as of 11/11 (before the Saints’ game). In fact, his rate of being double teamed was 0.1 on the X-axis, making him among the 10 least double-teamed edge rushers in the NFL to that point. Presumably, this number went down with Watt’s return. Regardless, the presence of Watt evidently elevates the play of Highsmith, and the third-round pick from 2020 appears to have progressed into a quality edge rusher.

According to Pro Football Focus, Highsmith had the highest graded game of his career on Sunday with a 91.4 overall grade and a 90.9 pass rush grade. He led the team with four pressures, and was second place with a 21.4% pass rush win rate. As such, he was instrumental to the team’s solid defensive performance, which featured a second half shut out and helped the team avoid a dreadful 2-7 start.