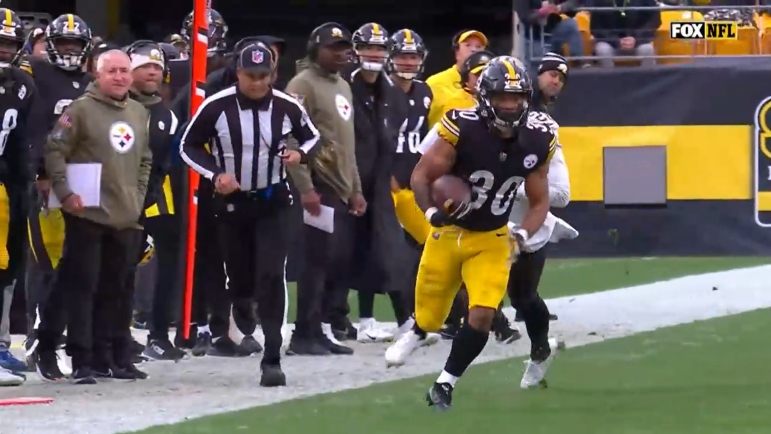 While the hyper-competitive Jaylen Warren didn’t want to sit out Monday night’s game against the Indianapolis Colts, he was unselfish enough to enjoy the performances by those who replaced him, RBs Benny Snell and Anthony McFarland. Speaking to reporters following Wednesday’s practice, Warren talked about those who ran with the chance created by his injury.

“I got a lot of joy from that, seeing them eat,” he said via the Steelers’ YouTube channel. “It’s a great thing to see us collectively producing. And I think when one produces, when one eats, we all eat and it’s cool. It was cool to see the guys take advantage of their opportunities.”

Warren sat out of the game with a hamstring injury suffered in the team’s Week 10 win over the New Orleans Saints. With Najee Harris suffering an abdominal injury in the first half, the Steelers’ backfield ran through Snell and McFarland. Prior to the game, Snell had logged just three offensive snaps all season, the clear #3 back in the offense, while McFarland picked up his first playing time in a literal year.

During the summer, Warren passed both men bye. McFarland lost his roster spot to him while Snell lost his #2 role. But Warren can relate to both men, counted out and easy to forget. His path to the NFL has been a bumpy one, starting at JUCO Snow College before transferring to Utah State and then to Oklahoma State, gaining ground – literal and metaphorical – with each stop. He’s had moments where he’s been the guy running with an opportunity. Monday, he got to be on the other side of that.

He also credited an improved Steelers’ offensive line for paving the way.

“You could tell they’re really coming together and having faith in each other and building that chemistry with each other.”

Pittsburgh has run for 100+ yards in their three games since the bye, even in the team’s Week 11 loss to the Cincinnati Bengals. In two of those games, wins over the Saints and Colts, the Steelers have run for over 170. Though Warren had to watch from the sidelines Monday, he could have his own opportunity this weekend against the Atlanta Falcons. Harris’ status is uncertain, he failed to practice Wednesday, while Warren returned in full and will play Sunday. If Harris is out, Warren is likely in-line to start with Snell and McFarland behind him. He and the rest of this crew will try to keep the Steelers’ run streak going while the team looks for its first winning streak of the season.