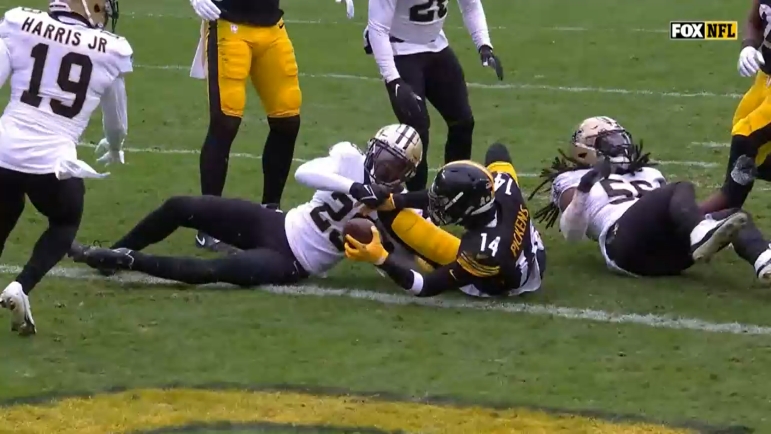 The Pittsburgh Steelers scored multiple offensive touchdowns yesterday for just the fourth time of the season. For the third time, both scores were rushes. For the second time, none of them were scored by a running back.

While quarterback Kenny Pickett’s one-yard sneak helped to put the game away in the fourth quarter, it was another one-yard touchdown, this by fellow rookie wide receiver George Pickens, who opened the scoring. And it actually didn’t go quite according to plan—but not in a bad way.

“It was a jet sweep, and I was initially supposed to widen out, run to the corner of the pylon, but I just kinda seen the end zone”, he told reporters in the locker room after the game via the team’s website. “When I got the [ball], I kinda seen the white line, and I just dove”.

Clearly, this is a Very Visibly Vicious And Brutal Takedown Of Tragically Horrendous Embattled OC1 Matt Canada From Legendary Superstar Rookie WR1 George Pickens, or so I imagine the headlines on some other websites will read once they decide to write about it after seeing that we have.

But of course, there are always options on a play, and if a sweep is designed to go to the pylon but the ball carrier sees that he can get in short of that, he is at liberty to make that adjustment and go for the end zone, as Pickens did here.

Going back to the play, it actually looks like it probably would have been a relatively easy walk-in touchdown if Pickens did decide to run the play as designed and take it to the pylon. The entire Saints defense, minus the corner covering Diontae Johnson outside the left-side numbers, were all caught in the box. Tight end Zach Gentry had a good seal on the right end with Miles Boykin in position to take on the final defender.

Not designed to go inside like that but George Pickens said he saw the opening and went YOLO. #Steelers #NFL pic.twitter.com/Gfd1zLO9lw

The play design actually kept that final defender from committing to the inside or outside and froze him long enough for Pickens to squeeze inside of a good interior block from right tackle Chukwuma Okorafor and get into the end zone. While it’s likely that either play would have been successful, this at least added a bit more drama. And it was a bit of a cathartic score—and win—for the whole organization.

“It felt good, I won’t lie to you, it felt good for everybody”, the rookie said. “I feel good for other people you know me I just play. I feel good about everybody. Social media team, everybody just because we are all in the same building”.

It was Pickens’ second touchdown of his rookie season, the first coming a couple of weeks back on a seven-yard pass from Pickett. The Steelers’ top two rookies are playing a defining role this season and should continue to do so for years to come.