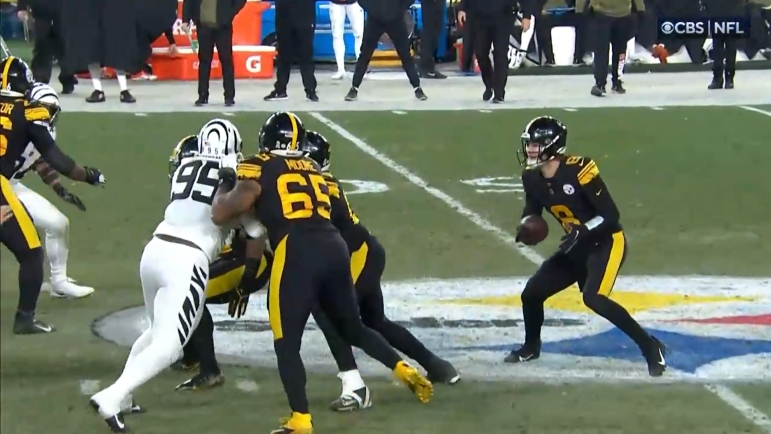 For the first 30 minutes of play, the Pittsburgh Steelers offense looked pretty good. Not perfect, still living a little dangerously with so many third-and-longs but it was one of Kenny Pickett’s best halves of his young NFL career. The Steelers’ offense hung 20 points, matching their season-high over an entire game. So things felt positive.

Save for a semi-garbage time drive to end the game, Pittsburgh’s offense was a clunky mess throughout the second half. Listen to the players post-game and they all sing the same tune. Missed chances, didn’t capitalize, had our opportunities. They’re right.

Let’s look at the two bigger sequences, pockets of plays, that show how ugly it got.

Both come in the fourth quarter in 27-23 games, the Bengals narrowly leading. Kenny Pickett throws a dime to George Pickens, rookie to rookie, down the right sideline for a gain of 33 yards, setting the Steelers up inside the opposing 40.

Pittsburgh tries to somewhat quicken the tempo with a trick play, a flea flicker from Najee Harris tossed back to Pickett. The exchange isn’t completely clean, Pickett needing to reach down and away for the ball, and it looks well-defended downfield (the All-22 will have to confirm). Nothing is there and Pickett throws the ball out of bounds.

2nd and 10 brings a run, something OC Matt Canada leaned on too heavily in this game. Linebacker Germain Pratt rallies downhill and shoots through, RG James Daniels unable to pick him off, and blows it up for a two-yard loss. Hello, third and long.

So now it’s 3rd and 12. Empty set with Pickett backing up probably a bit too much, a seven-stop drop already from the gun, making life harder on LT Dan Moore Jr., who loses the edge. The other side sees the line sliding away and LDE Sam Hubbard rushing in free. With the pressure-look, something we highlighted pre-game, Hubbard is intentionally left unblocked and is supposed to be read “hot.” But with Pickett’s deep drop and interior defenders bailing, there is no immediate hot. It all results in a sack that forces a punt.

I’ve lumped all three plays together – the failed flea flicker, the second down loss, and third down sack – for you guys to get a real feel for the ugliness of the sequence.

But the Steelers’ defense gets a stop and the offense gets back on the field. A downhill 13-yard run by Harris puts Pittsburgh 1st and 10 on the Bengals’ 34. Another great chance. Then it all falls apart.

First play is out of pistol, a run off left end similar to Harris’ 19-yard touchdown earlier in the game. But it’s called back on a hold on TE Pat Freiermuth, already throwing cold water on the drive’s potential and putting them in 1st and 20.

1st and 20 is supposed to be an elongated draw, a playcall the Steelers have run several times in recent weeks. But there’s miscommunication and Harris is pass blocking, never expecting the handoff that Pickett tries to pass off to no one. A broken play, Pickett tries to salvage it and hits George Pickens along the sideline, who makes a nice snag. But it’s negated by an ineligible man downfield call, the team’s sixth of the year. Can’t fault the o-line, run blocking like they’re supposed to, and it inevitably draws a flag.

Now it’s 1st and 25. Bengals getting depth, keeping things in front, and Pickett looks for the checkdown to Harris. But his pass misses badly and goes over Harris’ head incomplete. A terrible miss from this close. It probably wouldn’t have gained much but Harris never gets the chance to do anything with it.-2nd and 25 is no better, LT Dan Moore getting walked back and collapsing the pocket, leading to a missed short throw.

3rd and 25 is a give-up call to play field position. This is the draw that was called on 2nd and 20, executed properly here with Harris picking up a handful of yards but leading to another Pressley Harvin III punt.

After that second failure, the Bengals took the ball and showed the Steelers how it’s done, marching 93 yards for a touchdown that basically salted the game away.

There’s no question Pittsburgh had their chances. 33-yard completion to Pickens, 13-yard run to Harris. Both prime opportunities. And the Steelers couldn’t even attempt a field goal either time, punting on both, and truly squandering their chances.

30 minutes of pretty-good football isn’t going to be enough in the NFL. Definitely not to beat the Bengals. The Steelers will have to learn how to play a complete game against a good team. That hasn’t happened this year.