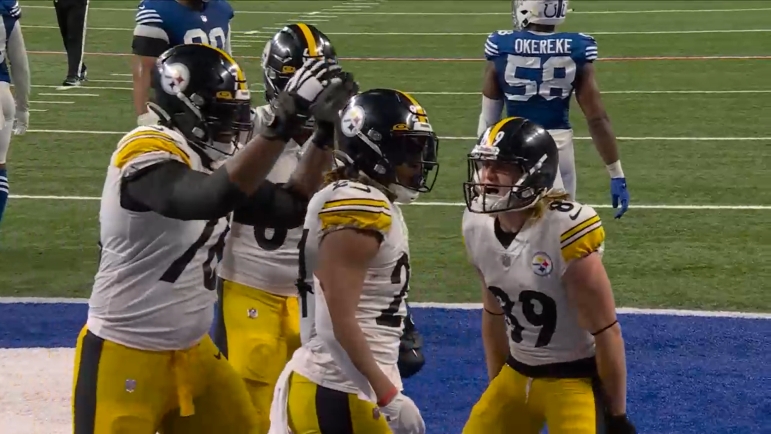 The Pittsburgh Steelers got back into the win column Monday night after beating the Indianapolis Colts 24-17. It was an unspectacular performance on both sides as far as the passing game goes with both QBs failing to pass for 200 yards. However, Pittsburgh managed to be effective yet again on the ground in the running game. Even with RB Najee Harris leaving the game due to an abdomen injury, Pittsburgh rushed for 172 yards on the night with RB Benny Snell Jr. leading the way with 62 yards on 12 carries including the go-ahead TD.

This was Snell’s first action of the regular season on offense after losing the backup job to Jaylen Warren in the preseason. Warren ended up missing tonight’s game with a hamstring injury, prompting Snell to become the next-man-up if Harris were to get hurt which unfortunately was the case, exiting the game by halftime with an abdominal injury.

Throughout the game, we saw Snell maximize most of his carries and display more juice, burst, and quickness than we have seen from the fourth-year runner out of Kentucky in his first three seasons in the league. He still was his downhill self, playing “Benny Snell Football” as HC Mike Tomlin likes to say, but also showcased more elusiveness Monday night, like on this run up the middle where Snell makes a quick cut to the left and then back to the right to avoid #45 E.J. Speed and finishes the run falling forward to set up third-and-short.

Snell would get three consecutive carries on this drive, being a reliable runner that picked up the tough yardage and successfully moved the sticks on his second carry. Notice on these next two runs how decisive Snell is in making a cut to make a defender miss but manage to get back to running downhill in a hurry. In the past, we have seen Snell look sluggish with the ball in his hands as he would adjust from working laterally to linearly, but against the Colts, Snell looked fresh, rejuvenated, and showed some wiggle that hasn’t been a big part of his game.

Pittsburgh’s running game has become the strength of the offense in recent weeks thanks to the improved play of the offensive line as well as the improvement amongst Pittsburgh’s running backs. Snell has always been touted as a short-yardage back that is best when you need to pick up three yards or less, not having the juice to rip off explosive plays at the NFL level. However, Snell managed to effectively challenge that narrative Monday night, ripping off multiple runs over 10 yards like this carry where Snell cuts back to the left into open space and gets a runway into the secondary where he picks up the first down.

Snell deserves a lot of credit for his play last night, but so does the OL who opened up some nice running lanes for him on the ground. Here is one example where LT Dan Moore Jr. keeps #91 Yannick Ngakoue from crashing inside and LG Kevin Dotson and C Mason Cole get the combo block on the interior DL and the LB, springing Snell into the second level where he gets into the secondary before he is ankle tackled by #32 Julian Blackmon.

While Snell showed us more elusiveness than we have seen from him for most of his NFL career, he didn’t stray away from playing his brand of Benny Snell Football. This run perfectly encapsulates that phrase, as Snell takes the handoff of the left side and meets #23 Kenny Moore on the corner and proceeds to run through the defensive back, putting his shoulder down into the defender and driving his feet, taking Moore for a ride as he nearly picks up the first.

Snell hasn’t been one that has been great at improvising in the backfield in the past, being a bigger back that does his best work running downhill with a runway rather than creating when the hole isn’t there. Still, Snell was able to turn a negative into a positive on this run last in the game where the offensive line couldn’t get a forward push, bouncing the run to the left and getting upfield, falling forward while being brought down by multiple Colts for an eight-yard gain on what appeared to be a stuffed play at the LOS.

Snell made the most of his opportunity Monday night, capping off the performance by getting in the end zone for the go-ahead TD that put Pittsburgh on top. Watch on this run as Snell takes the handoff on the RPO concept and runs toward the LOS, bouncing the run to the outside when the gap inside wasn’t there. He runs right off the backside of Dan Moore Jr. who walls off Ngakoue and runs in between two Colts defenders as he gets into the end zone of the score.

Overall, it was a great performance by Snell who made the most of his opportunity, averaging over five yards a carry while looking explosive and aggressive as a downhill runner. He picked up multiple chunk gains against the Colts’ defense while also churning out the tough yards on contact. It may not have been his best statistical performance of his career, but Monday night could be deemed as Snell’s best game as an overall runner during his Steelers career.

For a player that has been quiet for the majority of the season and is on an expiring contract, it’s great to see Benny Snell Jr. make the most of his opportunity in helping Pittsburgh get the win and advance to 4-7 on the season.  This isn’t to say that Snell should reclaim the backup job from Jaylen Warren when he is healthy or that he is now in line for a contract extension this offseason. Rather, this is a testament to the player Pittsburgh was hoping to draft when they selected Snell in the fourth round of the 2019 NFL Draft, being that player that fits the mold that Pittsburgh likes as a big, physical runner that can carry the load if called upon.

Time will tell if Snell is able to build off his performance Monday night regarding rest-of-the-season usage, but for a player that looked to be nothing more than a core special teamer, Snell showed Pittsburgh as well as the rest of the NFL on primetime that he can be a viable runner when he gets his opportunity.

What are your thoughts on Benny Snell Jr.’s performance against the Colts? Was this his best performance in the NFL? Do you think he may get some more opportunities given Pittsburgh’s injuries at RB and what he put on tape last night? Please leave your thoughts in the comments section below and thanks again for reading!