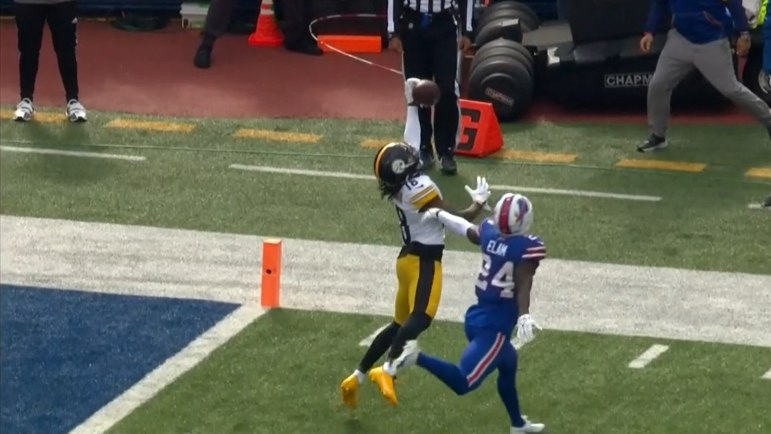 We’ve been hearing it quite a bit from the players and staff. Najee Harris mentioned it last week. Matt Canada made a similar declaration. Mason Cole felt the same way back in September.

The much maligned offense has struggled mightily in the first half of the season. The run game has issues. The pass game has issues. They aren’t pushing the ball downfield. There are no splash plays. If you’re like me you see the comments from the team and you think, “Yinz, are crazy! You aren’t close at all.”

While re-watching the game this week I started to notice there were plays that provided the opportunity to create splash plays. In fact, there were quite a few. Many were on a quarterback processing decision but this isn’t about bashing Kenny Pickett. The rookie is going to have his growing pains. I’m sure he watches the film and kicks himself over the missed chances.

It’s not just on him though. The line needs to block more effectively to give him a chance to go through progressions. Other players on the offense need to execute as well. Whether it be improved route running or blocking a second level player. The fact remains that there are plays to be made out there that would be a huge benefit to the offense.

The Flood concept is a play the team uses often. The idea is to put three receivers to the same side of the field with one on each level. They ran it a few times against Philadelphia twice dumping it to the short area receiver and once to the deeper receiver on a comeback route. That one was almost intercepted.

On this play, Pat Freiermuth will release inside the block of Zach Gentry and head deep on a Corner route. Gentry will block and release into the flat. Diontae Johnson will run a crossing route behind the linebackers who were drawn up by play action. He will be the intermediate level receiver.

Pickett sees two green jerseys in front of him and dumps it almost immediately to Gentry. Those defenders end up running into each other giving Pickett more time than he may have expected. Johnson settles in the middle of the field with no one near him. You can see him look around behind him to see all the open territory he had.

Claypool uses a head fake to get the cornerback to open his hips slightly to the outside and the defender heads toward Freiermuth. Claypool ends up wide open in the end zone. If Pickett hits his back foot, moves one step up and puts it on a line to the “S” in the end zone it’s a touchdown. You can see he was looking that way before taking off to run.

On this play Claypool and Johnson will run crossing routes over the middle of the field. Three defenders head toward Claypool and no one goes with Johnson. If Pickett hits him when he hits the near hash mark he has about 25 yards of open space to run. Instead, Pickett tried to thread the ball through two defenders to the tight end.

George Pickens didn’t receive a target until the midway through the second quarter. This is something that has happened multiple times this year. He then received three targets within seven plays and none in the second half.

Each of those targets was pretty much the same play. Pickens would run a Go route down the sideline and Pickett would make a back shoulder throw. It was the correct decision on the first two plays. On this play, it was the wrong decision.

You’ll see Pickens at the top of the clip make a move to the outside and he beats the defensive back. He is by him and this should have been a deep pass over his shoulder. The team hasn’t had a lot of opportunities to win on deep balls but this one was there for the taking. Instead, Pickens goes back shoulder again and it ends up incomplete.

The running game is not excluded from the missed opportunities. The production is not where the team wants it. So if you’re going to have a play that is blocked well, everyone needs to do their job.

On this play, the Steelers have a bunch to the left tight to offensive line. Pickens will go in motion to the other side of the field taking a defender with him. This leaves one player on the outside and the safety deep on that side. At the snap, Claypool will head out like he is going to block the linebacker but Cole is there to make the block.

Claypool figures out too late that he should have blocked the defender on the outside. If he does that effectively, that gives Jaylen Warren from the hash to the sideline to beat the safety for a score. One more block and that is a 27 yard touchdown.

What Does it All Mean?

Again, this isn’t an attack on the quarterback. Pickett has just over a quarter of the season under his belt. A few different decisions and who knows what can happen. This also isn’t a pat on the back for Matt Canada. His offenses have been subpar for a year and half now. Improvement is needed by everyone involved with the offense.

What I do see is there are plays to be made out there that to this point they have been missing. If they make one better decision, work though one more progression or make one more block things have the potential to improve.

Big plays give the whole team a boost. Confidence goes up. Momentum shifts. It fires up the defense. There is a domino effect that leads to winning football games.

Is the offense closer than we think? Yeah, they just might be.