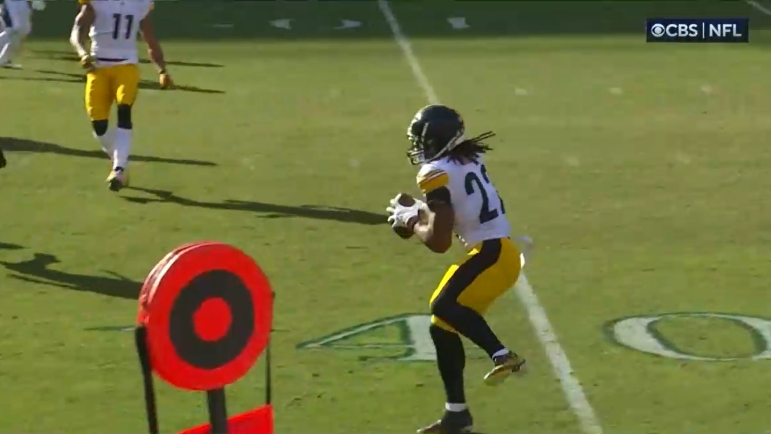 Pittsburgh Steelers running back Najee Harris has struggled in his second year in the NFL. On the first day of training camp he suffered a foot injury that bothered him until only a few weeks ago.

Last season, Harris was a dynamic back partially due to his pass catching ability, but this season he has not been utilized as much in the passing department. Part of the reason for that is Jaylen Warren’s emergence as a pass protector, something he is much better at than Najee Harris. This has led to Harris’ touches in the passing game to decrease due to him being off the field in some passing situations.

In a Tuesday press conference, running backs coach Eddie Faulkner was asked about if there was any thought to get Harris more involved in the passing game.

The Steelers went into this season with a very strong receiving corps on paper, and with Jaylen Warren excelling in the roles he’s been given, it was hard to put Harris out there in passing situations. However, today, the Steelers just traded Chase Claypool to the Chicago Bears for a second round draft pick, leaving a hole in the slot wide receiver position.

This trade may lead to Gunner Olszewski getting more playing time and taking over that role, or, the Steelers can utilize Najee Harris in that role. Harris is clearly struggling with confidence, and getting him the ball in space where he can pick up yards may help him gain that confidence back.

While some might say taking a running back in the first round was a mistake, it is neither here nor there at this point. Najee Harris is on the Pittsburgh Steelers and they need to find a way to get him going. He is a talented player who has dealt with a lot of unfortunate circumstances this year including an injury, bad play calling, and sub-par quarterback play. For the Steelers to be successful in the future, the need to get Najee Harris on the right track, and using him in the passing game is one way to get there.