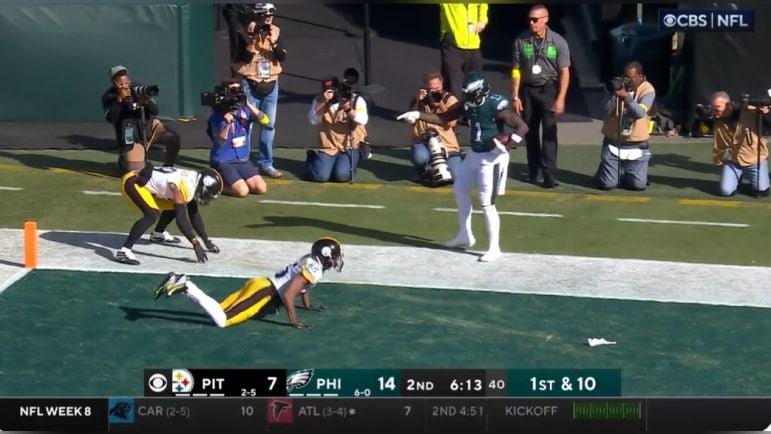 Brown celebrated his dominant first half performance with a finger point to Pittsburgh Steelers’ CB Ahkello Witherspoon and FS Minkah Fitzpatrick, a nod that even two defenders couldn’t stop Brown’s incredible first half of play. But according to Brown, in addition to being flagged, he was fined $10,000 for the taunt.

My two little finger points the other day cost me 5k a piece. I will keep my hands, feet, and other objects to myself from now on lol 😭😭😭

As Brown jokes, he’ll make sure to avoid that next time.

As painful as it may be for Steelers’ fans, here’s a look at the play. A well-designed scheme to fake the screen and then go over the top to hit Brown, who scored his third touchdown of the half, becoming the first player to ever have three receiving scores in the first half against the Steelers

It was the second touchdown CB Ahkello Witherspoon allowed on the day, leading him to being benched before halftime and replaced by James Pierre.

Brown finished the day with six receptions for 159 yards and those three scores. His day could’ve been even bigger than that. He dropped a pass over the middle of the field that would’ve negated another 20+ yard catch while Fitzpatrick caught him from behind to prevent him from finding the end zone a fourth time.

All NFL fines go to charity. Fine totals are preset by the CBA and are raised a specified percentage each year. The league has cracked down on taunting calls over the last two years, lowering the bar for a flag while levying fines for infractions.