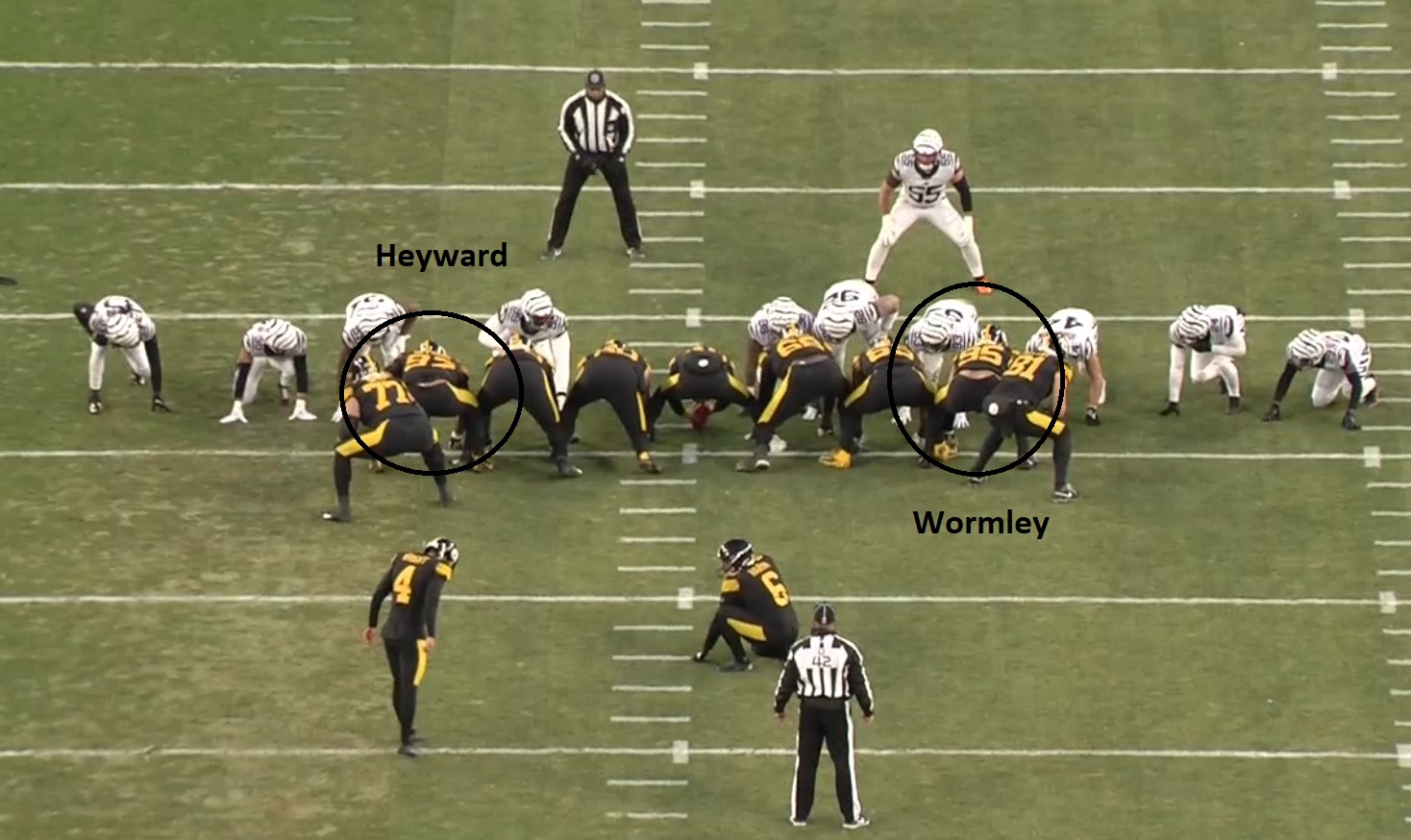 The football equivalent of Dirty Jobs has to be the field goal protect unit. At least, since they’ve gotten rid of the old wedgebusters. On the latest episode of his Not Just Football podcast, Cam Heyward and guest Chris Wormley shared in their loathing of having to block on kicks and getting chewed out for getting pushed around.

“Yesterday, I’m not getting cussed out, but I’m getting yelled at about my technique and giving up too much push and I’m like, ‘I got three dudes on me every play,” Wormley said about his performance on the field goal team.

Let’s highlight exactly what position he’s referring to. While the field goal kick team mostly consists of offensive linemen, the “tight ends” on the outside, right next to the wings, are occupied by defensive linemen. Heyward on the left, Wormley on the right. Big, strong players who can anchor and absorb defenders running full force into them.

With lining up over the long snapper illegal, teams have shifted to try to block field goals in the space between the tight end and the wing, making it a punishing job. It’s a job no one likes but one that has to be done. For the o-line, it’s the last snap they have to take, tired after the end of a drive, while defenders like Heyward and Wormley have to take the field just to be punched in the face.

Here’s one example where Wormley was likely chided by STs Coordinator Danny Smith, getting walked back on this field goal at the end of the half against the Bengals. But as Wormley says, he’s trying to block two players running straight into him.

For Wormely, all he believes should matter is the final result.

“As long as they don’t block the kick, I feel like job well done. I’m gonna pat myself on the back because that is hard work.”

There’s likely a heavier emphasis on better blocking following the team’s Week 10 win against the New Orleans Saints. New kicker Matthew Wright missed a pair of tries and while he has to make his kicks, the blocking wasn’t great with Wright getting his ankles and legs taken out throughout the game. Heyward joined in and said Mike Tomlin got on him for hitting the ground.

“You’re shooting both hands, so you’re giving up your chest and you’re saying just don’t block it. You’re gonna give ground. And so I gave ground and then got my footstep on and got turned around. And so Mike T during meetings is gonna say, ‘Oh Cam, you just gonna get turned around like that and lay on your stomach.’ It was not a pretty picture.”

Of course, we have to go to the tape. The play Heyward’s referring to came late in the game on one of Wright’s misses. Pushed back, wing Jesse Davis stepping on his foot, and falling down and into Wright, who gets his leg bumped at the end. You can also see Wright react to his second miss of the day.

Both joked they wished Danny Smith would send other players out to absorb these reps.

“Gets a little colder a little later in the year, body’s starting to hurt,” Wormley said. “Like, I need to save these reps for D line.”

But Heyward and Wormley will continue to do those jobs going forward. For a guy like Heyward, it’s proof no big is too big or too small. If he’s out there chasing after the ball like a madman defensively or doing the dirty work on the field goal protect team, no one else has any room to complain about their job. Except for the coaches, who will always be asking for perfection.