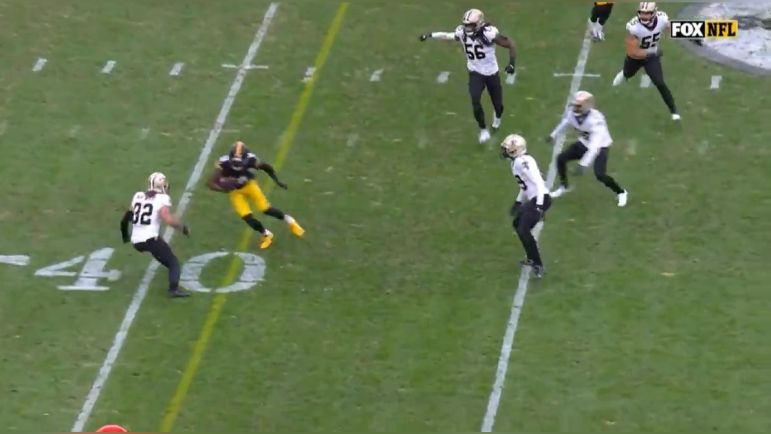 Diontae Johnson can be a serious threat after the catch. That is, if he’s going in the right direction. Johnson didn’t go all Wrong Way Marshall Sunday afternoon but he turned a sure-fire first down into 2nd and 1. After a 2nd quarter catch, Johnson tried to do a little too much after, going backwards and losing yards that wiped out a first down.

Speaking to reporters Wednesday, Johnson explained he was just trying to make a play.

“Trying to make a play after the catch,” he said via Steelers.com. “You’re expecting the defender to come a certain way sometimes and they don’t. Stuff happens. I know what I can do. Just gotta make sure I’m going in the right direction next time.”

Here’s a look at the play. A nice route by Johnson to get open but him doing a little too much post-catch, losing three yards that turned a would-be 1st and 10 into 2nd and 1.

Luckily, the Steelers converted and picked up the first down two plays later. But it’s a situation that should’ve been avoided in the first place and for Johnson, it’s not the first time he’s lost yards in the pursuit of trying to make a big play. And it created a funny snapshot like this one.

Diontae Johnson did not gain a first down on this play. #Steelers pic.twitter.com/hgorub1mrr

Like with most anything, there’s a risk/reward element and Johnson certainly has ripped off big gains after the catch. It was encouraging to see him even have the opportunity to run-after in this game after being stuck to mostly out routes, curls, and comebacks the first eight weeks of the year. He’s still on pace for just 162 YAC this season compared to 2021 when he registered 527 yards, a top-ten number in the league. Perhaps he’s pressing just a little bit too much trying to maximize the few opportunities he’s received.

Despite that negative outcome, Johnson and the Steelers’ offense showed some signs of life in Sunday’s win. Johnson finished the game with 63 yards, the second-most he’s had in a game this season, and he would’ve had a lot more had it not been for a pass interference penalty to prevent a long touchdown shortly before this play took place.

Johnson will look to make more plays this Sunday against the Cincinnati Bengals than in the Week One opener, a game in which he averaged under eight yards per grab. And when he makes his next grab, there’s no shame in just running straight ahead.