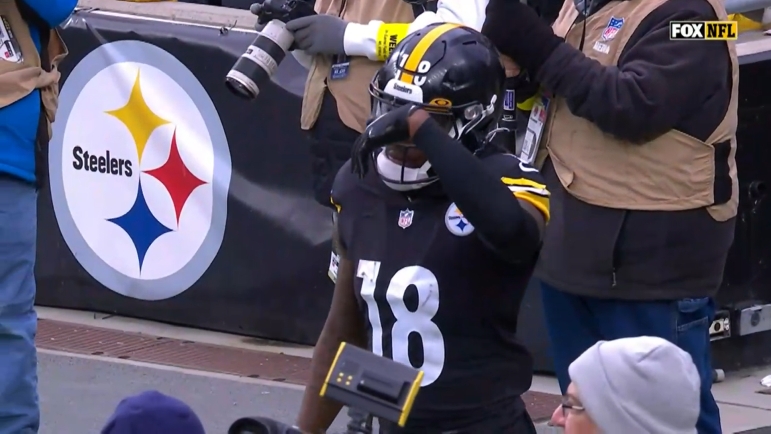 The Pittsburgh Steelers offense put up 20 points in the first half en route to taking a 20-17 halftime lead over the Cincinnati Bengals, and for the first time all season, things finally seemed to be clicking offensively. Then the second half happened. Pittsburgh opened the half with four straight three-and-outs, generating just three points after a T.J. Watt interception gave them the ball at the Cincinnati 21. Steelers receiver Diontae Johnson talked about why Pittsburgh’s offense was so much worse in the second half.

“We didn’t capitalize on field position, whenever we had it” Johnson said via a tweet from TribLive’s Chris Adamski. “We just didn’t make as much plays as we should have,” he added.

Diontae Johnson on why the first half offense was so good and the a sec one half so bad pic.twitter.com/bPMrztpdFl

Besides the Watt interception where Pittsburgh wasn’t able to score, the Steelers also got the ball at the Cincinnati 47 with 11:35 left in the game after a Bengals punt from their own end zone, with the Bengals leading 27-23. After running back Najee Harris rambled for 13 yards on first down, the Steelers went backwards due to a holding penalty against tight end Pat Freiermuth and then lost yards again on an ineligible man downfield penalty. After that, Pittsburgh was in a 1st and 25 situation, and quarterback Kenny Pickett went incomplete on back-to-back throws before a seven-yard run by Harris turned into a punt. Pittsburgh went from having a 1st and 10 on the Cincinnati 34 to punting away from the Cincinnati 42.

That’s not acceptable, and it’s a big reason why the Pittsburgh offense was so lackluster in the second half. When you get good field position, you have to put points on the board, whether its three or seven. With an opportunity to do so, the Steelers punted, and the next drive was a 91-yard touchdown drive for Cincinnati that put them up two scores. If Pittsburgh was able to at least make a field goal on that drive, it’s a 27-26 game and a Bengals touchdown and extra point still makes it a one-score game at 34-26. Pittsburgh would have had to convert a two-point conversion, but with the time remaining on the clock, that’s a lot more doable than two scoring drives.

The Steelers are now 3-7 on the season, and they have to figure out their offense. Pickett looked lost in the 2nd half after a pretty solid first half, and his regression was a big reason why Pittsburgh wasn’t able to capitalize on their good field position. The play calling was suspect again per usual, with way too many runs called on 2nd and 10 and an atrocious sequence after a 33-yard completion to wide receiver George Pickens in the second half, where the Steelers attempted a flea flicker and then a 2nd and 10 run that sapped any momentum Pittsburgh had before Pickett was sacked on third down.

With a resurgent Colts team under interim Head Coach Jeff Saturday coming up next Monday and an extra day to prepare, I really hope we see something good from this offense next week.