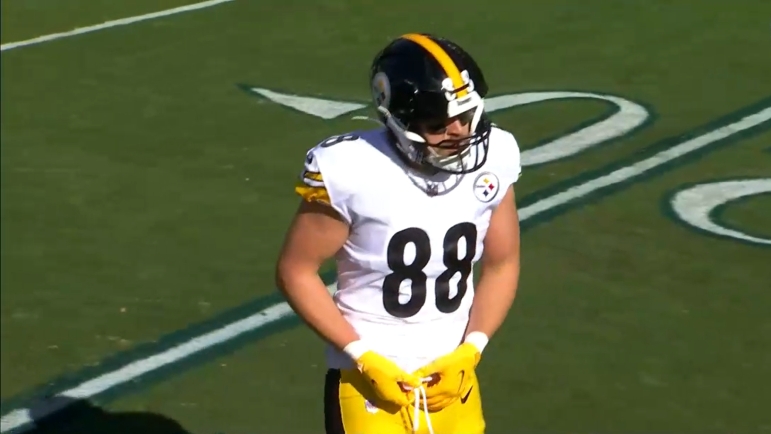 Pittsburgh Steelers tight end Pat Freiermuth has struggled to find the end zone this season despite his success last year. In his rookie season, Freiermuth caught seven touchdown passes which helped the Steelers crawl into the playoffs as the seven seed. This year, he has only seen the end zone once.

However, despite his lack of touchdown receptions, Freiermuth has still been a really good weapon for the Steelers offense and rookie quarterback Kenny Pickett. He is second on the team in receptions with 44 and leads the team in yards with 482. Last season, Freiermuth only had 497 yards, so barring a catastrophic injury he should shatter that this season.

Freiermuth is still a great safety valve too. He has the second most targets on the team with 67, 19 less than Diontae Johnson. He’s also second on the team in “big” receptions which ESPN classifies as receptions that go for 20 or more yards, only behind rookie phenom George Pickens.

So, how has the Steelers budding tight end been able to make up for his lack of touchdowns? He is getting down the field more and racking up more yards per catch. Last season, Freiermuth averaged 8.3 yards per catch as the Steelers utilized a quick passing game to offset their bad offensive line and immobile quarterback. This season, under more mobile quarterbacks and improved offensive line play, Freiermuth’s route tree has gotten deeper, averaging eleven yards per catch. In fact, proof of this comes from the fact that his yards after catch is almost virtually the same as last year. Last year Freiermuth averaged four yards after catch, while this year it is 3.9.

Even the controversial PFF believes Pat Freiermuth has been good this year, even going as far to say he has been better. Last season Freiermuth graded out at 72.3, but this year he has improved to 75.4. Not a huge jump, but the quarterback play in Pittsburgh declined this year.

As Pickett improves, so will Freiermuth. Don’t worry about the tight end’s lack of touchdowns this season, the Steelers have a potentially great QB-TE duo for years to come.