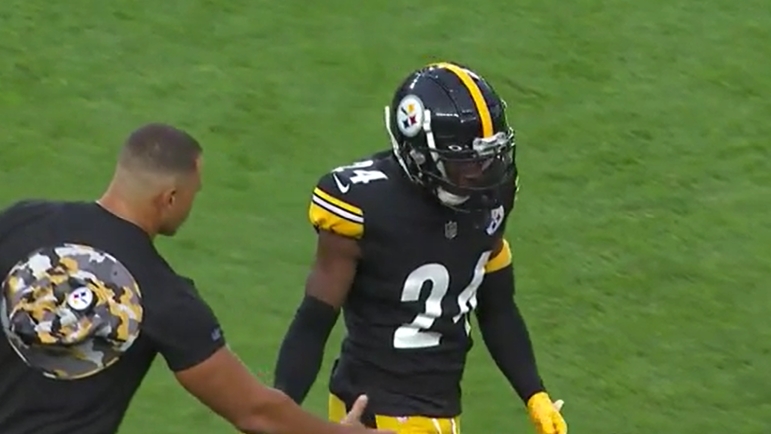 It’s not often you’ll get the full scope and nature of a player’s injury from the Pittsburgh Steelers, at least initially. Oftentimes, head coach Mike Tomlin likes to remain pretty straightforward with the injury without going into too much detail.

That leaves it up to the player to discuss, and that’s exactly what veteran safety Damontae Kazee, an offseason addition in free agency, did Monday coming out of the bye week.

Kazee, who has been on the Reserve/Injured list since Sept. 1 after making the initial 53-man roster before being designated to return on IR following a wrist/forearm injury suffered in the preseason final at Acrisure Stadium against the Detroit Lions on August 28.

According to Kazee, he broke his entire forearm on the play on a tackle near the Lions’ sideline that day and had nine screws and a metal plate inserted into his arm, he said to the media Thursday, according to a tweet from ESPN’s Brooke Pryor.

Kazee also says he dislocated his wrist, but it popped back into place during surgery.

Added he’ll be playing with a padded brace, and he’ll “look like Ironman.” But says he’ll be ok. https://t.co/K6N16LMpt1

That explains the use of the aircast immediately upon suffering the injury, and then the subsequent surgery that has kept him out of action for the first eight games of the season.

Prior to Monday, Kazee had his 21-day window activated on Oct. 20. The veteran safety who spent time with the Atlanta Falcons and Dallas Cowboys before signing with the Steelers after the 2022 NFL Draft, must return to practice and be activated off IR within 21 days, or he has to stay on the list for the remainder of the season.

Kazee stated to reporters Monday that he expects to be activated before Thursday at 4 p.m., which is the end of his 21-day window.

While on IR, Kazee also served a three-game suspension for a violation of the NFL’s personal conduct policy, liking stemming from the DWI he was arrested and charged with last season while a member of the Cowboys.

Once activated from IR, Kazee could slide back into the role the Steelers envisioned him playing at safety alongside Minkah Fitzpatrick and Terrell Edmunds coming into the year who could play in the slot, deep safety, or handle himself in the box.

Getting a versatile defensive back like Kazee into the fold gives the Steelers a variety of options, as he can play both safety spots (either free or strong, though primarily free) or in the slot. With Cameron Sutton, William Jackson III, Ahkello Witherspoon, Levi Wallace, and Arthur Maulet at cornerback, and Minkah Fitzpatrick, Terrell Edmunds, and Tre Norwood at safety, they are somewhat stocked up in the secondary now.