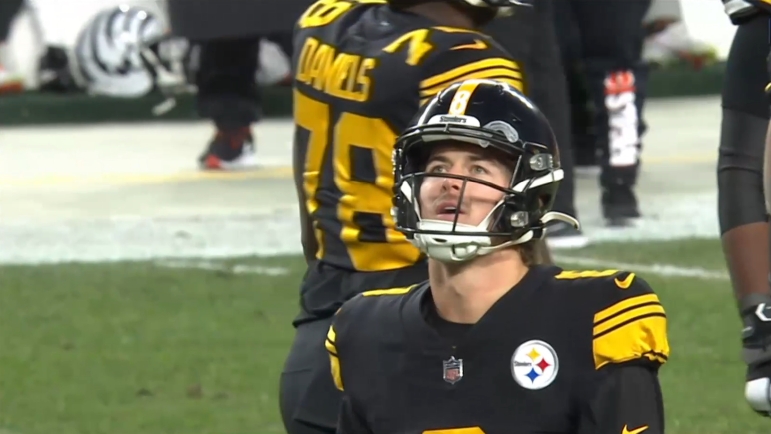 Seven games into his NFL career, one key aspect of the game that is currently missing for Pittsburgh Steelers rookie quarterback Kenny Pickett is a common one for young players at any level: consistency.

In the two weeks since the Steelers’ Week 9 bye week, Pickett has shown serious flashes of being that reliable quarterback with his arm and legs that the franchise envisioned he could be when they selected him 20th overall in the 2022 NFL Draft, making him the first quarterback off the board.

Those flashes showed up in a major way in Week 11 in the first half against the Cincinnati Bengals. Through 30 minutes of play, Pickett was 14-of-19 passing for 141 yards and a season-long 24-yard touchdown to fellow rookie wide receiver George Pickens. He also used his legs to extend plays and make key throws down the field.

Something changed at the half though as the rookie quarterback — and the offense in general — fell off a cliff, especially in the third quarter, going three-and-out three straight times to open the second half, allowing the Bengals to come roaring back and pull away in the eventual 37-30 win for Cincinnati.

According to Pro Football Focus’ grades, Pickett graded out at 55.9 overall against the Bengals, his third-lowest grade of the season, just ahead of Week 6 against Tampa Bay (49.5) and Week 8 at Philadelphia (51.9). A large reason for the low grade is the consistency factor that is missing currently with Pickett.

“Pickett reverted to type this week with multiple turnover-worthy plays after posting his first game without any,” PFF’s Sam Monson writes regarding Pickett’s overall season. “He averaged 6.3 yards per attempt against the Bengals, but the mistakes were major issues even if they didn’t result in any interceptions. Pickett also missed an open George Pickens for what should have been an easy touchdown. Overall, the flashes are there, but the consistency is not.”

Consistency is not there with Pickett, that much is certain. That’s to be expected though for a rookie quarterback getting on-the-job training. He’s going to have highs, he’s going to have lows. How he deals with those highs and lows is important though.

With Pickett, the moment never looks too big for him. He doesn’t ride the emotional rollercoaster and is going to keep slinging the football, good and bad.

Still, finding that consistency is key. Going through swings like the one displayed Sunday against the Bengals from the first half to the second half, especially with his accuracy seemingly disappearing, can’t happen. It’s still incredibly early in his career, but down the stretch in the second half Pickett has to start showing the consistency needed at the position in the NFL.