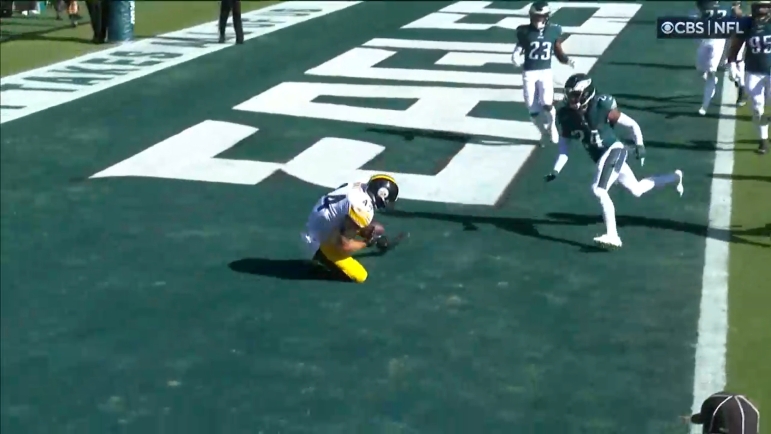 The Pittsburgh Steelers scored only one touchdown this past weekend in Philadelphia and it came thanks to opening up offensive coordinator Matt Canada’s bag of tricks. On fourth and goal from the one Kenny Pickett handed the ball to Chase Claypool in what seemed like a reverse, but instead of trying to get to the goal line, Claypool passed the ball to a wide open Derek Watt.

In his weekly press conference transcribed by the Steelers, Matt Canada was asked if that was a play that has been in the Steelers playbook for a while, or if it was something special he drew up specifically for the Philadelphia Eagles game.

“We’ve actually had that for a long time. We practiced it last year for a few weeks. Obviously, Chase is left-handed. That’s a formation we’d run on the goal line last year with a couple of plays” Canada answered. “We had it kind of worked up,  worked it a couple weeks this year and felt like it was the time for it.”

Credit where credit is due, Matt Canada picked the perfect game to call that play. When the Eagles and Steelers met in 2020, Chase Claypool scored a touchdown on a reverse handoff near the goal line, so the Eagles may have been expecting that again. Instead, Claypool passing the ball caught the entire Eagles defense off guard allowing for an uncontested touchdown catch.

Unfortunately, Canada will not be able to use Chase Claypool in anymore trick plays this year as today Claypool was traded to the Chicago Bears for a second round pick.

Some of the Steelers best plays this season have come from the “trick play” section of Canada’s playbook. One play in particular that stands out was the big play to Pat Freiermuth in week one where Mitch Trubisky handed the ball off to Najee Harris who then handed it to Gunner Olszewski who then flipped it back to Trubisky who found a wide open Freiermuth.

With it becoming increasingly unlikely Matt Canada returns next season, head coach Mike Tomlin may be keen on keeping some of the trick plays that Canada has drawn up over his three years in Pittsburgh.