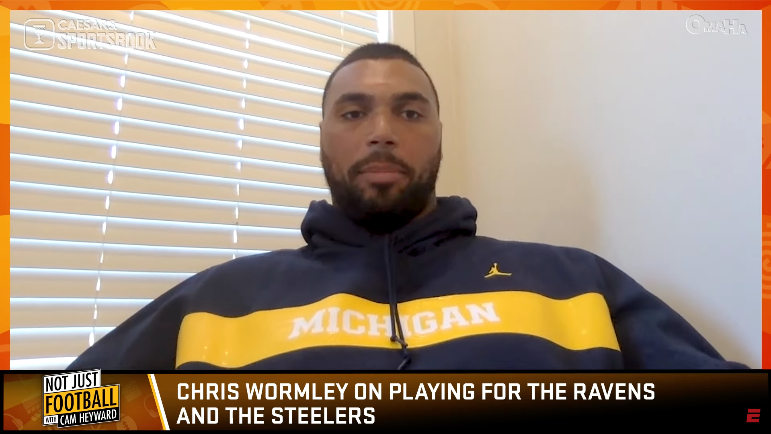 Early on in his NFL career as a member of the Baltimore Ravens, defensive end Chris Wormley looked like he was going to be the next steady rotational piece up front in the trenches for the Ravens in their 3-4 scheme under head coach John Harbaugh.

As a third-round pick out of Michigan in the 2017 NFL Draft, Wormley caught on quickly and started 14 games in his first three seasons, providing a ton of versatility up front for the Ravens. Then, for whatever reason, the Ravens added new pieces in the trenches entering the 2019 season, putting Wormley — who had started six games and appeared in all 16 in 2018 — in a tough situation.

Ultimately, it led to his trade request, which eventually landed him in Pittsburgh in a rather rare trade between the two AFC North rivals, which was the first one between the two since 1997 when Baltimore traded a seventh-round pick to the Steelers for offensive lineman Bernard Dafney, who played one game with the Ravens.

The only other player trade involving these teams occurred in 1997, when Baltimore sent a seventh-round pick to Pittsburgh for OL Bernard Dafney.

Dafney played one game for Ravens.

In the Wormley trade, Pittsburgh sent a 2021 fifth-round pick to Baltimore for the veteran defensive lineman and a 2021 seventh-round pick in March 2020. Wormley was entering the final year of his rookie contract and ended up appearing in 13 games that season for the black and gold before later signing a two-year deal in free agency to remain in the Steel City.

Appearing on the Not Just Football w/ Cam Heyward podcast Wednesday morning, Wormley discussed what led to the trade request with the Ravens that eventually landed him in Pittsburgh. Unsurprisingly, it’s because he felt disrespected in Baltimore based on the trajectory of his career.

“The reason why I asked for that trade, three years ago or whatever, wasn’t just because I didn’t wanna be there anymore. They had signed some guys and I kind of saw the writing on the wall as far as what it was looking like for me, in terms of playing time,” Wormley stated to Steelers teammate Cameron Heyward and co-host Hayden Walsh, according to video via the NFL on ESPN YouTube page. “And I was asked to take a pay cut and I’m like — this on my rookie deal — ‘how am I gonna take a pay cut on a rookie deal?’ So, I got out of there. I felt like I was a little disrespected in terms of how I thought that my trajectory of my career was going after my third year. I thought I was playing well.

“Then I got sent to Pittsburgh and, you know, last year was fun beating them twice. Having the performance I did that first game was pretty sweet, a little revenge,” Wormley added. “So yeah, I think I turn up a little bit more and it definitely means a little bit more to me knowing that I got traded from there and I get to play ’em twice a year. It’s always fun.”

Wormley, of course, is referring to his three-sack performance against Lamar Jackson and the Ravens at then-Heinz Field on December 5, 2021, which happened to be a 20-19 win for the Steelers after the Ravens failed to convert a two-point conversion in the final seconds, dropping a key AFC North matchup.

With Wormley, the Steelers added a versatile piece up front that can play both end positions and can handle nose tackle reps, which makes him a valuable reserve piece of the defensive line. The trade was certainly a surprising one, but Wormley has been a solid addition to the group overall and played rather well in 2021 in a starting role after Stephon Tuitt’s injury.

In the final year of his contract with the Steelers, Wormley has yet to play the Ravens this season, but those two revenge games are coming for the Michigan product. We’ll see if he can get up for those games again and come through with big performances in both.