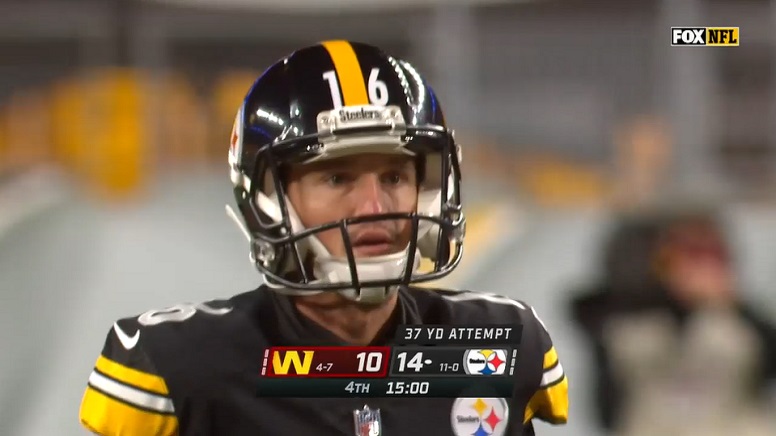 Coming out of the bye week, the Pittsburgh Steelers appeared relatively healthy overall, especially on special teams, where standout kicker Chris Boswell was seemingly set to return from a groin injury that popped up late in the week before the Week 8 matchup against the Philadelphia Eagles, keeping him off the field.

Turns out, he wasn’t fully healed and the Steelers were forced to make some changes at the kicker position this week, at least for the foreseeable future.

After using rookie undrafted free agent kicker Nick Sciba against the Eagles to solid success (1-for-1 on extra points, 2-for-2 on field goals), the Steelers decided to go in a different direction earlier this week after placing Boswell on the Reserve/Injured list with the groin injury, forcing him out for at least four weeks.

With Boswell out at least four weeks, the Steelers reunited with former kicker Matthew Wright, whom they signed off the practice squad from the Kansas City Chiefs, leaning heavily into familiarity and resume when it came to the decision making at the kicker position.

Wight previously spent time with the Steelers in 2019 and 2020 as an undrafted free agent out of UCF, playing in three games in 2020, connecting on all four field goals he attempted, along with all seven extra points. Wright later spent time with the Detroit Lions in 2021 and then caught on with the Jacksonville Jaguars that same year, connecting on 21-of-24 field goals with that Jaguars last season in 14 games.

The highlight of his time with the Jaguars was the game-winning field goal against the Dolphins in London to end the Jags losing streak. pic.twitter.com/DlC3zpJktR

This season, Wright played in two games with the Chiefs, connecting on 3-of-4 field goals.

That familiarity and overall resume made the Steelers rather comfortable to reunite with the 26-year-old kicker. Speaking with Steelers.com’s Bob Labriola Sunday ahead of the Week 10 matchup with the New Orleans Saints, head coach Mike Tomlin discussed the factors that went into deciding to sign Wright to the 53-man roster instead of Sciba.

“We’ve been with Matt before. Matt has banged with us before in games. Matt banged with Jacksonville last year, and he was 21-for-24 on his field goal attempts for the season,” Tomlin said, according to an article on Steelers.com. “He’s got a couple plus-50-yard kicks this year already for Kansas City, so we were extremely comfortable with his resume. And the fact that we’ve been exposed to him before, and if Boz is going to be out for an extended period of time, a number of weeks, then we just felt really comfortable with that certainty and that more extended resume than Nick had.”

On paper, that makes quite a bit of sense. When it comes to kickers available around the league, few were as familiar with the Steelers as Wright was. The Steelers did their due diligence on the former college standout ahead of the 2019 NFL Draft and watched him develop nicely in other stops around the NFL, especially in his tenure in Jacksonville last season.

Though the Steelers were familiar with Sciba, having spent the entire offseason with him and seeing him in action in a stadium recently against the Eagles, that overall resume and experience in the NFL as a whole as the deciding factor, at least in Tomlin’s eyes.

“So when that’s the situation, the resume wins out.”

When explained like that, it makes all the sense in the world why the Steelers went outside the organization to sign Wright to the 53-man roster, ensuring they landed someone they were quite familiar with in Wright for at least the next four weeks, but also ensuring they landed a guy with plenty of experience kicking in stadiums across the league.

Sitting at 2-6, the Steelers have a chance to go on a run here in the second half of the season against a lighter schedule. Prior to his injury, Boswell was one of the main sources of scoring for the black and gold, who have struggled mightily offensively this season. We’ll see if Wright is up to the task.

Based on his play elsewhere in recent seasons, he’ll be more than serviceable with Boswell on the mend.