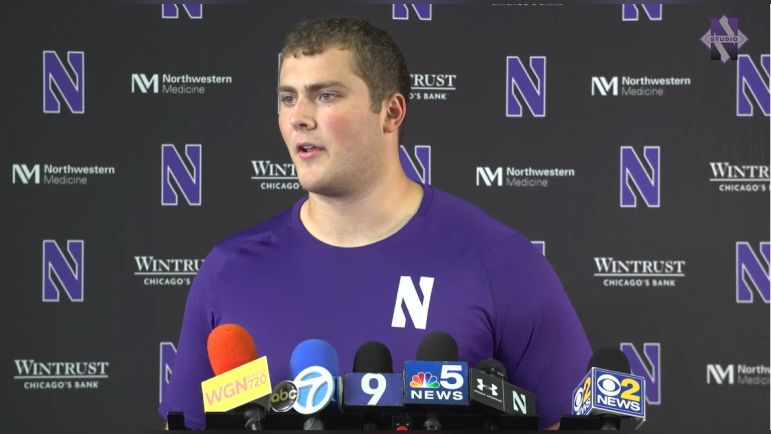 In his write up on Skoronski, Trapasso writes about how good of a pass protector he is and how this is a need for Pittsburgh.

“Skoronski has been a brick wall in pass protection at Northwestern. He’s exactly the type the Steelers need.”

A brick wall is exactly what Skoronski has been. According to PFF, he has only allowed five pressures on 383 pass protections.

This is exactly the type of player the Steelers need on their offensive line. This past offseason Pittsburgh added James Daniels and Mason Cole and both have performed well. While Cole likely isn’t the long term answer at center, his play has bought the team a little bit of time to address the more pressing issues of the offensive line, such as offensive tackle, and specifically left tackle.

As of now, Dan Moore Jr. has been okay at left tackle, but by drafting Skoronski the Steelers would be a big upgrade in the line term. Skoronski has the chance to be an elite lineman in arguably the most important position. If Pittsburgh does draft him, they would have a great player to protect quarterback Kenny Pickett’s blind side for years to come. In addition, Skoronski is a good run blocker too and could open holes for Najee Harris and Jaylen Warren.

Drafting Skoronski also makes sense when bringing in the resume of Andy Weidl who is now the Steelers’ assistant general manager. Weidl left the Eagles organization this past offseason after working there since 2016 when he joined their scouting department. In his time with the Eagles he placed emphasis on building the trenches. In his six years with the Eagles, they drafted eight offensive lineman and ten defensive lineman. It makes sense that in his first year heading up the Steelers draft, he would place importance on the trenches and use a high draft choice on that position group.

CBS has Skoronski ranked as the sixth best prospect in the draft and the best prospect in the tackle position. In this mock draft, only Bryce Young and Will Anderson Jr. were drafted before Skoronski meaning that the Steelers would pass on Ohio State quarterback prospect C.J. Stroud. Another interesting note about this mock draft is that Chicago Bears hold the second pick in this draft, meaning that the Steelers would be picking at 34 thanks to them owning Chicago’s second round pick due the the Chase Claypool trade. With the Steelers picking Skoronski and the Bears picking second, this mock draft is basically perfect for Pittsburgh.