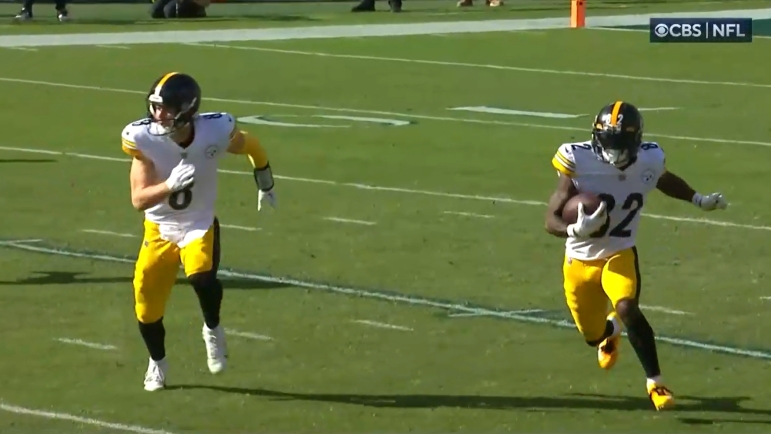 Head coach Mike Tomlin called Sims, who has spent the last two seasons with the Steelers on the practice squad or on the 53-man roster, an electric player with the football in his hands on Tuesday during his weekly media session.

On Thursday, outside of the UPMC Rooney Sports Complex on the South Side following practice, second-year offensive coordinator Matt Canada used that same word to describe the 25-year-old receiver, praising him for working hard and providing a spark to the Steelers when called upon.

“I think Steven’s done a good job being an electric guy. Certainly, he made two good plays in the game we called upon him on, the last one there. So, I think he gives some electricity with some things,” Canada stated to reporters Thursday, according to the official transcript provided by the team. “He works hard. Him and Gunner [Olszewski] both really brings some things to us – a little bit different – that are positive for us that way, and obviously Miles [Boykin] as well. So, those three guys will also kind of absorb some of those reps in that personnel group as well as other players.”

As Canada mentioned Thursday, Sims has stepped up to the plate and delivered when called upon by the Steelers this season, whether that’s from a special teams perspective or offensively. With the trade of Chase Claypool to the Chicago Bears for a second round pick in the 2023 NFL Draft opening up an increased role in the slot for a guy like Sims, the opportunity is there for the taking.

I'm ready to see the Antonio Brown-like mannerisms/body movement of Steven Sims back as the Steelers' return man. #Steelers pic.twitter.com/qxCMpQUCkc

The Steelers desperately need some serious splash and energy offensively under Canada.

When he’s touched the football this season, Sims has had an impact. Against the Tampa Bay Buccaneers in Week 6, he returned the opening second half kickoff 89 yards, the team’s longest return since 2017, and setting up a field goal drive in a narrow two-point win. Sims also chipped in a 24-yard punt return later in the game, again giving Pittsburgh some desperately needed field position.

In Week 8 against the Eagles, Sims saw an increased role offensively, which may have signaled the Steelers were ready to move on from Claypool. Against Philadelphia, Sims was targeted three times and added two carries in the loss, one of which went for 11 yards and a first down.

Now, with an opportunity for an increased role in front of him, the veteran could have even more of an impact for the Steelers, even if the number of touches might not increase. He needs to continue to be electric with the football though, especially on an offense that struggles to create chunk plays.