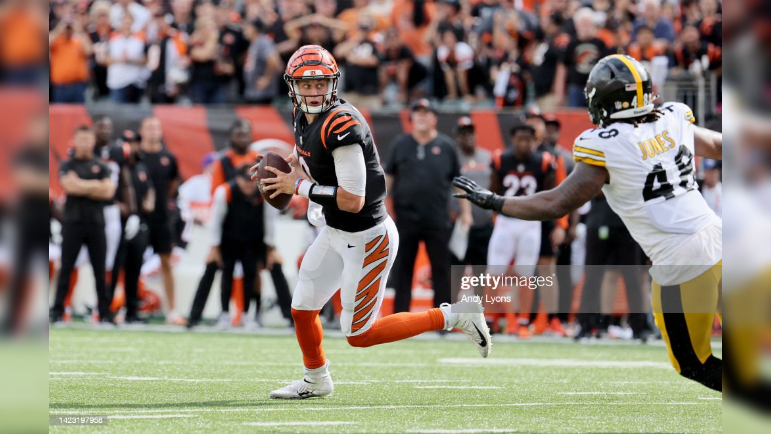 DL Cam Heyward spoke to the media Thursday in the locker room and talked about the team’s upcoming matchup on Sunday in Pittsburgh against the Cincinnati Bengals. When Heyward was asked about what the defense needs to key in on when facing Bengals QB Joe Burrow, Heyward was quick to mention the QB’s mobility as an underrated facet of the young passer’s game.

“And then I just think that he’s deceptively mobile,” Heyward said to the media Thursday prior to practice on video from 93.7 The Fan’s Josh Rowntree’s Twitter page. “He does a great job of shrugging off defenders. If you look back at the New Orleans game, he had a really good run where it looked like everything was bottled up and he found a way to get out of it and scored a touchdown. And there were just a lot of plays like that throughout the season. Really got to make sure that you really bottle him up and keep him in the pocket because he can beat you with his feet as well as his arm.”

Currently, Burrow has 35 rush attempts for 141 yards and four rushing TDs on the season. He is one yard away from surpassing his career high in yardage back during his rookie season back in 2020 where he only played ten games, tearing his ACL that required season-ending knee surgery. It’s become common place for high-level athletes to return back to form after an ACL tear thanks to modern medicine, but the healing process as well as the rehabilitation and ramp up period post-surgery usually keep athletes from returning to what they were at prior to the injury until they are at least a full year removed from the procedure.

This appears to be the case with Burrow as it has been for other high-level NFL players like WR Cooper Kupp who had a down year in 2020 before becoming the triple crown winner at receiver last season. Burrow doesn’t possess the same mobility as Lamar Jackson or Justin Fields, but he was an accomplished dual threat option coming out of LSU. He rushed for 767 yards and 12 TDs in his two seasons at LSU, using his legs to extend plays outside of the pocket while also having the ability to tuck-and-run himself when he saw the defense not commit a defender to him. Heyward mentioned the Saints game where Burrow escaped the pocket and got into the end zone after looking dead-to-rights.

Something about Joe Burrow in Louisiana 🔥

Given that WR Ja’Marr Chase is not expected to suit up for this game, Burrow may look to use his legs more often in this matchup against the Steelers should Pittsburgh cover well on the backend. The defensive front will have to do a good job of getting pressure on Burrow like they did Week 1 when they sacked him seven times, but also not get too antsy, exposing open rushing lanes that Burrow has the skill set to exploit to pick up easy yardage on the ground.