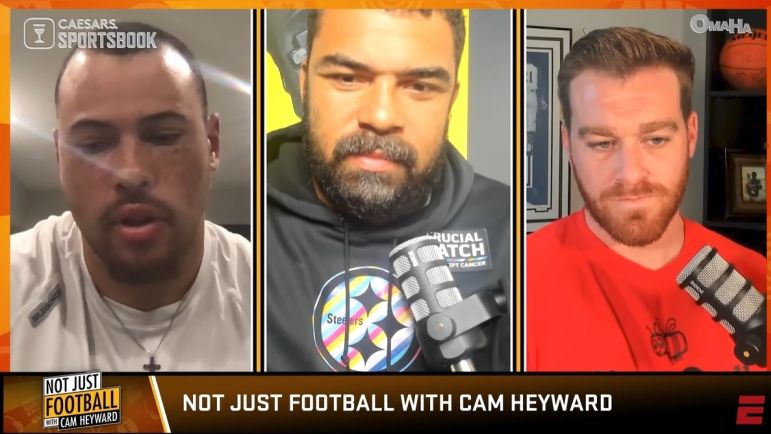 While the Pittsburgh Steelers’ pass rush has suffered greatly without T.J. Watt, it hasn’t prevented Alex Highsmith from having a career year. Highsmith already has a career-high 6.5 sacks with half a season to go and Watt expected to return in Week Ten. That will take some of the attention off Highsmith and place it back on Watt, something Cam Heyward says is dangerous for offensive linemen to do. He evaluated Highsmith’s game on the latest episode of his Not Just Football podcast, of which Highsmith was a guest.

“Even though TJ got hurt, with Alex, I think he was going to have a really good year regardless if TJ got hurt,” Heyward said. “Whether you get more chips, more slides your way, I think he’s grown every year. You’ve seen teams have to gameplan. If they single him up, I pity the fool who does that. Alex is successful for a reason and he takes advantage of opportunities.”

Highsmith has nearly as many sacks as the entire Steelers’ defense, responsible for 6.5 of the team’s 15 this season. Three of those came in the Week One opener as Pittsburgh’s defense dominated the day, sacking Bengals’ QB Joe Burrow seven times while creating five turnovers. Though the Steelers’ defense cooled from there, Highsmith kept putting up numbers with 3.5 sacks over his next five games. Highsmith added he’s done a better job to finish the play and hit his “layups,” not missing sack opportunities he did in past years.

“I think the biggest jump from Year Two to Year Three for Alex is…we talk about not missing the layups. We talk about when you get the sack, you make it. Or somebody else is going to clean it up. Usually it’s T.J. So you gotta make sure you take advantage of the opportunities and I think Alex is doing that right now.”

Still, there’s more for Highsmith to do. Facing quality left tackles the last two games, Highsmith has gone quiet. His pressure rate is only marginally up from a year ago and he could still be more consistent getting after the quarterback. But Watt’s return will help everyone, including Highsmith. There’s no question teams slide to their left side, the Steelers’ right, more with Watt out of the lineup. That limited Heyward and Highsmith’s chances to produce. More than ever, teams are aligning their tight ends and running backs as wings, chipping and slowing down the Steelers’ rush. Pittsburgh’s had to force to use a near-automatic “check” to stunt and loop inside against those looks which forces guys like Highsmith to try to work through the trash instead of rushing off the edge.

Without getting overly granular, this much is obvious. Watt’s return is a massive boost for a Steelers’ defense in a dozen ways. More pressure, fewer blitzes, and a simplified scheme that doesn’t rely on so many people and personnel. Highsmith will try to reach double-digit sacks the rest of the way and if he sees more of those single blocks, as Heyward warns, he’ll likely reach that mark.

Listen to the whole podcast below.