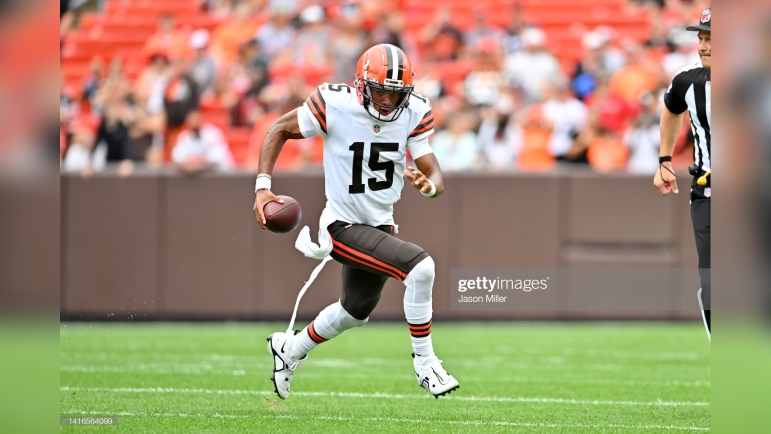 Deshaun Watson is officially back on the Cleveland Browns’ roster. Which means Josh Dobbs no longer is. In a corresponding move that took Watson off the suspended list and onto the team’s 53-man roster, the Browns waived QB Josh Dobbs.

Dobbs has served as the Browns’ backup throughout the season though with Jacoby Brissett healthy, Dobbs hadn’t appeared in a game all season. Signed to a one-year deal this offseason, perhaps Dobbs will sign to the Browns’ practice squad provided he clears waivers.

A 4th round pick of the Steelers in the 2017 draft, he’s thrown just 17 career passes, all with Pittsburgh, across the 2018 and 2020 seasons. Dobbs has bounced around a fair bit in the NFL. Drafted by Pittsburgh, traded to Jacksonville in 2019 weeks before Ben Roethlisberger’s season-ending elbow injury, claimed back by the Steelers in 2020 before landing with the Browns earlier this year.

Watson has officially served his 11-game suspension and will start Sunday’s game against his former team the Houston Texans. The Browns are clinging to faint playoff hopes but kept those slim odds alive with an overtime win Sunday over the Tampa Bay Buccaneers. The Browns now sit at 4-7 on the season and will likely need to go 5-1 the rest of the way with Watson in order to have a chance at a Wild Card berth.

Pittsburgh will face Watson’s Browns in the regular season finale in Week 18, a home game for the Steelers. They lost to Cleveland in Week 3, 29-17.