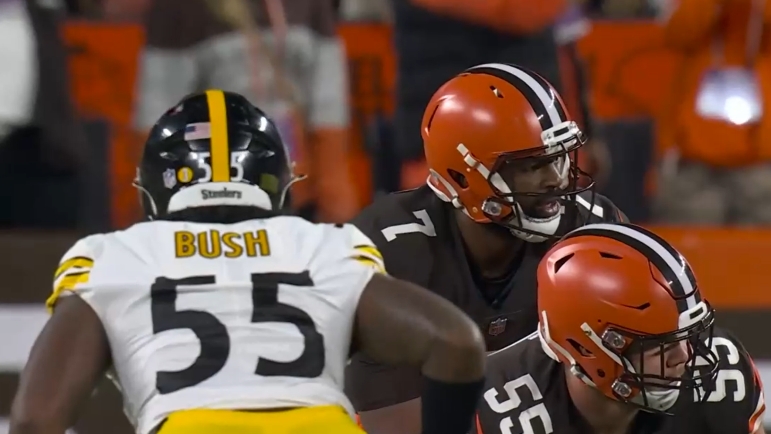 You haven’t heard Devin Bush’s name come up too much this year. Ordinarily that’s not a good thing for a linebacker, but coming off the season he had last year, it certainly is for the fourth-year Pittsburgh Steelers veteran.

In fact, while he still has his warts, he’s put together a solid campaign overall. Not just in terms of his stat line but with respect to what he’s putting on tape. On the whole, he’s playing with more physicality and instinct, taking better angles, making a few more plays. It’s been noticed, certainly by his coaches.

“Devin’s worked to improve really in every area of his game the entire year”, said senior defensive assistant Brian Flores via the team’s YouTube channel, who primarily works with the linebackers. “Like everyone, he’s had some good plays, he’s had some plays he wishes he had back, but overall, I think he’s doing a lot of good things”.

The Steelers are on their bye week, the players finally getting time off starting today after spending the early portions of the week on the practice field and in meeting rooms. Flores talked about having conversations with all his linebackers for midyear reviews, and he said that his conversation with Bush revealed a player “excited about the second half of the season” and “trying to string together good days”.

Bush has had the occasional good day overall, I suppose. He is sitting at 44 tackles on the season at the moment with one for loss, with one pass defensed. Of note is the fact that the Steelers have liberally used a situational rotation at linebacker, leaving Bush to play about two thirds of the snaps.

While he is only credited with one pass defensed, his biggest play of the year doesn’t actually register statistically. It was a pass defensed at the goal line a couple weeks back against the Tampa Bay Buccaneers. But because it occurred on a two-point conversion attempt, it doesn’t count, even though it essentially won the game.

Of course that’s not the only play that he has made. You would want to see more tackles in the backfield, naturally, but he has been much more comfortable playing in the box and playing with his feet going forward than he showed a season ago.

But it’s all about baby steps—at least in theory. The reality is that he has never even returned to the level that he played during his rookie season, during which, for example, he had nine tackles for loss. But given where he was a year ago, the development, just getting him to a point where he is regularly a liability, is a big deal.