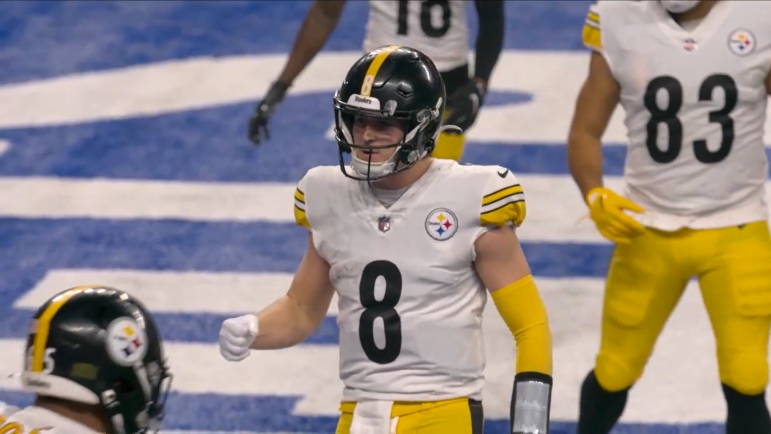 The Pittsburgh Steelers offense scored over 24 points for the third week in a row, which was a mark they did not surpass in their first eight games before the bye week. Contrary to their most recent loss to the Cincinnati Bengals, however, they were able to put together a meaningful second-half drive. While they punted on their only two drives in the third quarter, they were able to put together an 11-play 75-yard game-winning touchdown drive in the fourth. When asked what changed, quarterback Kenny Pickett insisted that the offense’s execution was the impetus rather than schematic changes.

“Yeah, just get that first down and we feel like we moved the ball really well,” Pickett said when asked what the team did better in the fourth quarter than the third according to a post-game interview on the team’s YouTube channel. “We had those two three-and-outs, slow start. Just based on execution alone, nothing schematically or X’s and O’s wise. Just flat out execution-wise, we gotta make plays, I gotta make throws, and we would have been on the move just like we were in the first half. That’s something we definitely need to clean up. But just really happy with the guys and how we responded, especially on those third downs. I think that’s what really helped us come away with the win.”

Indeed, the offense flipped a switch with execution in the fourth quarter, as the team put together a long touchdown drive after struggling to move the ball in the prior quarter. The fourth quarter began with a 3rd & 9 conversions to receiver George Pickens and a roughing the passer call on top of it. Pickett went onto convert two more third downs on the drive, as well as an impressive two-point conversion throw.

There is plenty for Steelers Nation to smile about after Monday’s offensive outing. Going up against an Indianapolis Colts’ defense that ranked in the top 10 in yards and points on the road, Pickett and company were able to put together an impressive 24-point performance. Not to mention, the team ran for 172 yards despite starting running back Najee Harris not playing in the second half.

The Steelers’ second-half offense has arguably lost them a few games this season. After leading in the first half by a score of 20-17 against the Bengals last week, the offense punted on their first three drives in the second half, giving up their lead and never regaining it. While this game appeared to be more of the same in the second half, the offense was able to put together an impressive touchdown drive to win the game.