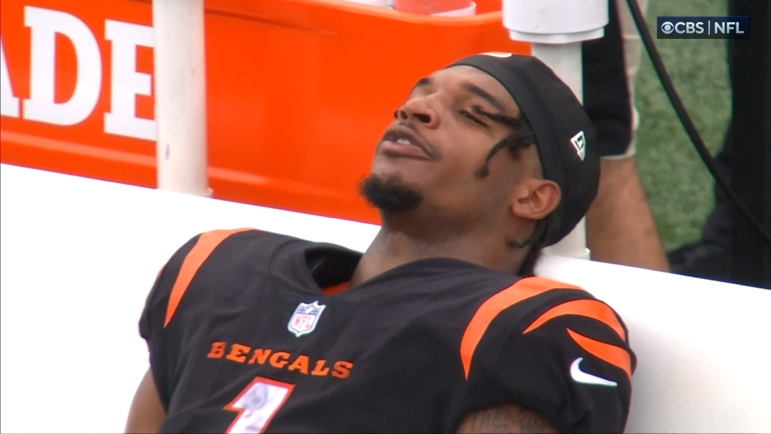 The Cincinnati Bengals are sitting at 5-4 right now after winning three of their final four games before their bye. They had a commanding 42-21 win over the Carolina Panthers in their last outing during which running back Joe Mixon scored five times, the offense hardly appearing to miss 2021 Offensive Rookie of the Year Ja’Marr Chase.

But they did look lost without him the week before that in a blowout loss to the Cleveland Browns. And it is not at all clear that the second-year wide receiver will be ready to return in time for the Bengals’ next outing in Pittsburgh as they play guest to the Steelers.

Chase suffered a hip injury earlier in the season that has already caused him to miss the team’s last two games. Even though the nature of the injury projects a four-to-six-week recovery time, the team declined to place him on the Reserve/Injured List, hoping that he could return sooner. The fact that bye weeks don’t count toward the four-game minimum a player must spend on IR was surely a consideration as well.

Bengals head coach Zac Taylor declined to provide an update on the status of his young star wide receiver when speaking to the media yesterday. One of those reporters in attendance, however, previously reported that Chase was seen “still walking on crutches”, via Kelsey Conway.

That doesn’t exactly sound like somebody who is going to be ready to play on Sunday, though I’m not a doctor. It would certainly be nice if the Steelers were able to avoid seeing him, especially given their issues in the secondary this season.

The former fifth-overall pick has been quite dangerous playing Pittsburgh thus far in his young career. In three games, he has 17 catches for 233 yards and three touchdowns. He had a 129-yard game against this secondary back in week one of this season, and he scored two touchdowns in week three of his rookie season last year, his first of five career multi-score games.

The thing is, he was hot when he got injured. He had a combined 15 catches for 263 yards and four touchdowns in the Bengals’ two games prior to his hip injury. Through the first seven games, he caught 47 passes for 605 yards and six touchdowns.

He is still the team’s leading receiver in every major category despite missing the last two weeks, but third-year Tee Higgins does have 41 catches for 564 yards and three scores, while Tyler Boyd, their veteran slot receiver, has 537 yards on 37 receptions with four touchdowns.