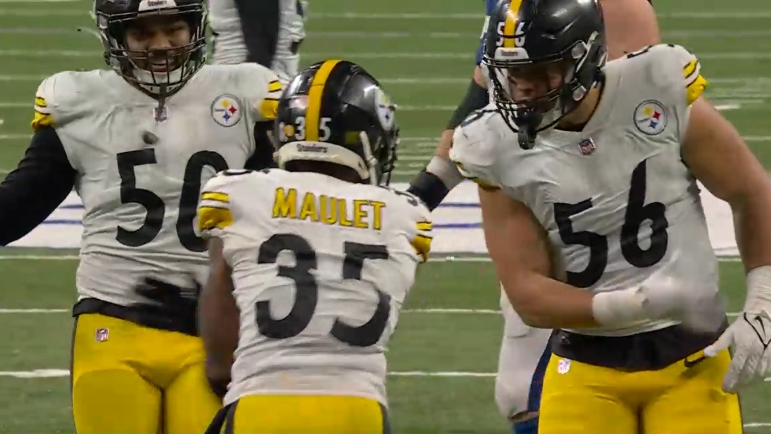 There’s a certain mold of a player that the Pittsburgh Steelers very clearly look for in a nickel cornerback, that being a physical, downhill player, one that plays with a chip on his shoulder and fights tooth and nail to defend every blade of grass on every single snap.

The Steelers had that for four years with Mike Hilton, and now, through a year and a half of their partnership with veteran Arthur Maulet, they seem to have that all over again.

Teach tape moment from Arthur Maulet on this slot fade breakup against 1st rounder Chris Olave. Play up through the hands, don't give up, rip the ball down and out.

Coming off of an impressive performance in Week 12 on Monday Night Football against the Indianapolis Colts, in which he recorded a team-high 10 tackles, a sack, tackle for loss and a quarterback hit in the Steelers’ 24-17 win, Maulet received some praise from head coach Mike Tomlin Tuesday during his weekly press conference with the media.

“He’s a run-down nickel. He’s a good blitzer. He’s a good tackler,” Tomlin stated to reporters, according to video via the Steelers’ official YouTube page. “He brings a demeanor for a small guy that’s kind of reflective of the dominant nickels that play. All the nickels that are dominant ones are angry little people. They don’t stay blocked. They don’t get blocked. They blitz extremely hard and well, they tackle big people. They play with an edge, and he fits that mold.”

You can always count on Tomlin to be an exceptional quote.

“Angry little people” will now be a thing with Maulet moving forward, I guarantee it. Tomlin meant it endearingly too.

For four years with the Steelers, Hilton was that angry, violent nickel cornerback, one that blitzed extremely well, tackled well around the line of scrimmage and was essentially an extra linebacker with coverage abilities for the Steelers. That’s largely what Maulet has been since the Steelers signed him ahead of the 2021 season after losing Hilton in free agency.

Good for Arthur Maulet. So good playing around LOS. Great break on Ryan.

On Monday night, Maulet showed what he can be when he’s at his best and is deployed properly. Throughout the game against the Colts, Maulet lived in the box and attacked downhill against the Colts’ rushing attack, helping slow down Jonathan Taylor in a big way. Maulet was also a very effective blitzer, leading to his sack of Matt Ryan in the win. He consistently applied pressure when blitzed off the edge and really made life difficult for the Colts offense.

That’s what he does best when he’s deployed in the box and asked to play downhill, rather than in coverage. He might fit that angry little people mold that Tomlin talked about, but he plays bigger and harder than his size and really provides a jolt of energy for the Steelers when on the field.