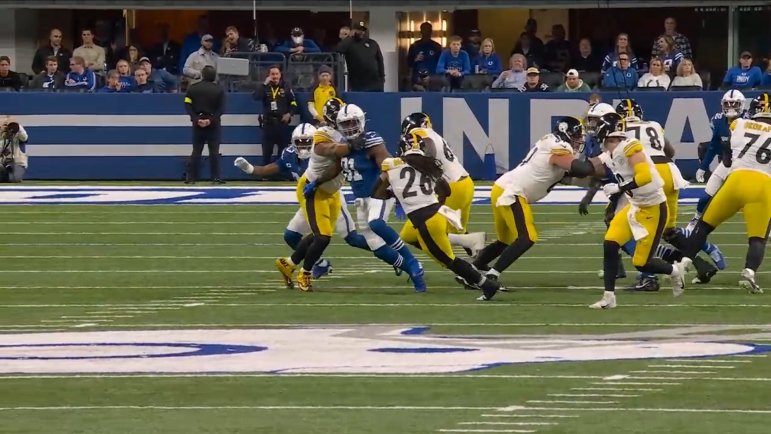 The Pittsburgh Steelers’ running game has looked better since the bye week, coming off of three successful games in a row now. They rushed for over 170 yards on the ground in last night’s win over the Indianapolis Colts—and they did it with just 35 yards combined from Najee Harris and Jaylen Warren, the latter inactive due to injury.

Veteran back Benny Snell Jr. shouldered the lion’s share of the load, recording 12 carries for 62 yards, but Anthony McFarland Jr. also played a valuable role. He rushed for 30 yards on just six carries, including a 14-yarder, and also added a 12-yard reception (plus another that didn’t go so well—losing a yard).

A 2020 fourth-round pick, McFarland struggled to contribute his first two seasons and found himself on the practice squad this year. He only dressed because of Warren’s injury, and it meant a lot. “It felt good to be back,” he said after the game via the team’s website, “just being out there with the team.” But he knew he had a responsibility.

“Najee came up to us before the game and just told us we were gonna have to make plays and step up,” he said, referring to himself and Snell, in the absence of Warren. “And then that’s what we did,” he added, the two combining for over 100 yards from scrimmage.

As a practice squad elevation, McFarland will immediately revert back to where he was, but the Steelers would elevate him again next week if necessary. Not only is Warren still coming back from injury, but Harris also exited last night’s game with an abdominal injury.

It’s not currently known what his status is and whether his availability could be in jeopardy for the team’s next game. If either Harris or Warren will have to sit out, however, it would be a safe bet that McFarland would get another crack at it.

Prior to last night’s game, he had just 36 carries in his career for 116 yards, plus seven receptions for 65 yards, on 108 offensive snaps played. He had just three yards on three carries across two games played last year after spending much of the season on the Reserve/Injured List.

It must be said that he did have a solid training camp. Were it not for the undrafted free agent Warren establishing himself as a training camp phenom and pushing his way onto the roster, McFarland likely would have preserved his roster spot.

Would he have been successful, though? That question we can’t answer. He did his job last night. We don’t know when or if he’ll get another opportunity to show that he can sustain success beyond a glimpse or two on one night against a banged-up front seven.