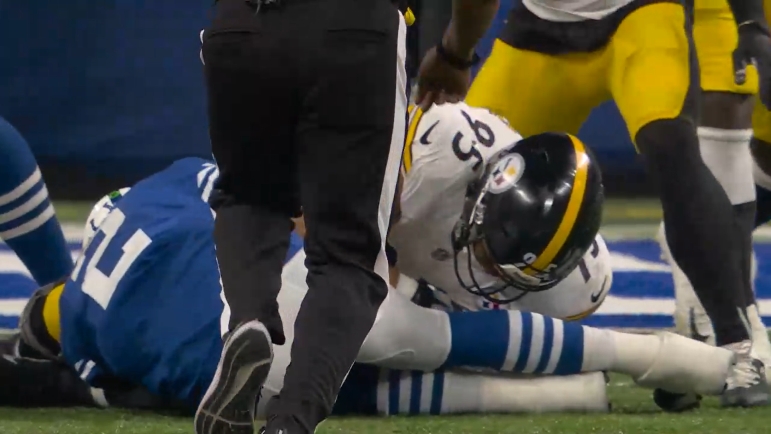 The Pittsburgh Steelers got back into the win column Monday night after beating the Indianapolis Colts 24-17. While neither QB was really impressive in terms of posting prolific passing numbers in this game, Pittsburgh beat the Colts on the ground, totaling 172 rushing yards on the night compared to Indy’s 110 yards on the ground. The defense mitigated RB Jonathan Taylor’s impact in this one, keeping him from ripping off the big run and held him to 86 yards on 20 carries.

In fact, Taylor was in-position to score his second rushing TD of the game, but dropped the handoff from QB Matt Ryan, resulting in a fumble that ended up getting recovered by DL Chris Wormley that gave possession to Pittsburgh and kept the Colts from getting into the end zone.

OLB Alex Highsmith was asked about the play and Wormley recovering the fumble, Highsmith initially thought QB Matt Ryan had gotten on the ball but was pleasantly surprised to find out that it was Wormley who recovered the fumble to given possession back to Pittsburgh.

“So, I was in, and I was outside, and I got off and at first I thought Matt Ryan recovered it but then I saw Worm just find his way into it,” Highsmith said to the media Sunday during a post-game press conference which aired on the team’s YouTube channel. “So, he did a great job. Made a great play for us on that play right there.”

Ryan failed to corral the ball on the ground when he fell to the turf in hopes of landing on the football, having it go away from his torso and more to his feet, giving Wormley the chance to wrestle the ball away from him and recover the loose ball for Pittsburgh. The fumble recovery may not have led to points as Pittsburgh went three-and-out, but with the Colts scoring on the next drive, it was imperative to keep it a one-score game with Pittsburgh successfully did.

In football, the outcome of games often comes down to how the football falls on plays like tonight where Wormley found himself in the right place at the right time. The recovery helped Pittsburgh move to 4-7 on the season, and while they are far from where they want to be here as the team begins the home stretch of the 2022 season, they are showing signs of resiliency like on this instance on Monday Night Football.