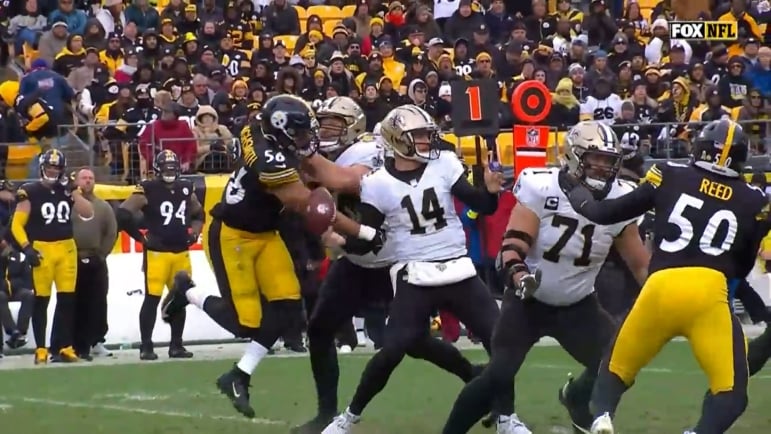 While the Pittsburgh Steelers welcomed back superstar defender T.J. Watt into the fold yesterday, it was his running mate, Alex Highsmith, who provided the spark in the pass rush. Already holding a commanding team lead in sacks, he added two more on the day to raise his season total to 8.5 through nine games—2.5 more than he had all of last season in his first year as a full-time starter.

The Steelers had seven sacks as a team in the opener before Watt was injured, but their ability to get after the passer was significantly impeded in the interim. The seven games that followed only saw them add eight more sacks to their list, and 3.5 of them had come from Highsmith, who had three on his own in week one. He now has five of his 8.5 sacks on the season in the two games in which he has had Watt on the other side.

“Today, Alex got through quickly and was able to affect the game, and he deserves it. He works his ass off”, Watt said of his younger teammate via the team’s YouTube. While Watt did not have a sack on the day himself, he did have a key third-down tackle of Andy Dalton that had the same effect as a sack.

Highsmith’s sack production has had a mild tendency to come in bunches. He now has three multi-sack games on the season, but he also has four games in which he failed to register on the stat sheet. That included the two games before last week’s bye, and three of the last four overall.

“I just wanted to have an attack mindset”, he said of his approach against the New Orleans Saints to his pass-rush attack coming out of the break. “The past couple games I hadn’t hit home, so I knew that’s something I wanted to get back on track with. Just thankful”.

It was an approach that obviously worked well, and he also had the opportunity to show off his arsenal of pass-rush moves, including a spin move he has continually worked to effect that registered a sack. He produced a forced fumble, though New Orleans was able to recover.

Highsmith will be going into the final year of his rookie contract next season, which is typically the time at which the Steelers—and most teams—attempt to work out long-term contract extensions with their core players before they hit the open market.

Like it or not, he is setting himself up to be awarded a handsome pay raise, whether that comes from the Steelers next summer or until free agency of 2024 should a deal fail to be struck between the two parties.

His two sacks bring him back up competitively to a tie for the fourth-most sacks in the NFL along with the Baltimore Ravens’ Justin Houston, who has been on a tear lately. Only Matthew Judon has reached double digits thus far, sitting at 11.5 and potentially threatening to challenge the single-season sack record Watt tied just last year. Za’Darius Smith—another former Raven like Judon—and Nick Bosa are also ahead of Highsmith with 9.5.