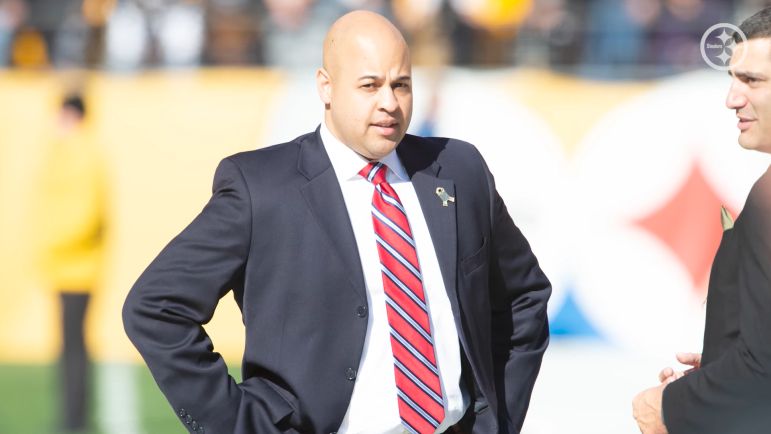 When most expected the Pittsburgh Steelers to be quiet ahead of the NFL trade deadline on Tuesday, they made a shocking trade sending WR Chase Claypool to the Chicago Bears for a second-round pick in the 2023 NFL Draft. It was rumored that Pittsburgh was asking for a second-round pick in return for Claypool who is currently in his third season and has one year left on his rookie deal. This led many, including NFL insider Ian Rapoport to believe that Claypool wouldn’t be moved prior to the trade deadline due to the high price tag Pittsburgh put on their WR who hadn’t met the expectations he set in his rookie season.

Apparently, the Bears were happy to oblige Pittsburgh’s asking price, and di so parting with their own second-round selection rather than the second round pick they acquired from the Baltimore Ravens for LB Roquan Smith just yesterday.

Currently, the Pittsburgh Steelers are projected to have the 4th overall pick in the 2023 NFL Draft according to Tankathon after starting the season 2-6. Chicago is slotted to pick 12th overall in the 2023 NFL Draft, having their second-round selection slotted in at 43 overall if the season were to end today. Currently, Pittsburgh is slotted to own three picks in the first 45 selections with #4, 35, and 43 overall in the first two rounds.

Pittsburgh is in uncharted territory when it comes to their record, starring down their first losing season since Mike Tomlin became the team’s head coach. However, they are now expected to have the best draft capital they have had in decades to try and remake this roster and address key needs in attempt to bring this team back to relevance in 2023.

GM Omar Khan, Assistant GM Andy Weidl, and the rest of the front office will have an opportunity to put their stamp on this roster early in their new tenures in their respective positions. When it comes to players/positions to monitor, we must look at the trends of the new faces in the front office. Khan has been working under former GM Kevin Colbert for more than two decades, seeing how he addressed the draft and free agency. Weidl comes over from Philadelphia where he and GM Howie Roseman put a heavy emphasis at beefing up the trenches, investing premium draft capital into the offensive and defensive lines as well as multiple picks in draft classes to add depth to both units upfront.

Given where the Steelers are slotted, they look primed to do a complete overall of both the offensive and defensive lien if they so choose. Georgia DL Jalen Carter is a blue-chip prospect that Pittsburgh could plug next to Cam Heyward as the team’s future on the defensive interior for years to come with their first-round selection. Alabama EDGE Will Anderson Jr. likely won’t be available, but Clemson EDGE Myles Murphy would likely be available if they wanted to go that route. Pittsburgh also would have their choice of the draft’s top OT prospects including Maryland’s Jaelyn Duncan, Penn State’s Olumuyiwa Fashanu, or Northwestern’s Peter Skoronski to give the team a potential franchise LT for the future.

In the second round, Pittsburgh could address both the offensive and defensive line depending which direction they choose to go in Round 1. One player that sticks out like a sore thumb in terms of value if passed on in the first round is Minnesota C John Michael Schmitz who is possibly the most dominant interior offensive lineman in college football and projects to be a starting-caliber center in the league. Other interior OL like Florida’s O’Cyrus Torrance, Notre Dame’s Jarrett Patterson, or Texas A&M’s Layden Robinson also project to be quality starters at guard/center in the NFL that could be had with either Pittsburgh’s second-round picks or possibly their third-round selection

Minnesota center John Michael Schmitz (6'4" 320) wasn't on my radar entering this film (was studying RT Faalele) but he kept flashing so I went back through to study him. He's officially on my watch list for the season after a VERY impressive performance 👀 pic.twitter.com/a1bfLsemuE

Given how much Pittsburgh’s pass rush has struggled since T.J. Watt injured his pec in Week 1, spending an early Day Two pick on a talented edge rusher to rotate with Watt and Highsmith as well as provide insurance for Highsmith who is entering his final year of his rookie deal would be a sensible investment. Kansas State’s Felix Anudike-Uzomah, LSU’s BJ Ojulari, or Texas Tech’s Tyree Wilson all would bring another dynamic pass rusher to Pittsburgh’s defense. Interior defender’s like Baylor NT Siaki Ika, Florida DL Gervin Dexter, or South Carolina’s Zacch Pickens all would beef up the defensive line should Pittsburgh pass on a premium DL in Round 1 of the 2023 NFL Draft.

EDGE #19 Tyree Wilson from Texas Tech is a name #Steelers fans need to have on their radar. At the top of college football in terms of pressures and has phenomenal length paired with a nasty bull rush. Green Bay Packers Prestin Smith a near identical comp. #NFLDraft https://t.co/gLjkmp0g08

Pittsburgh could opt to address other positions of need not on the line of scrimmage. ILB could be a big need to find a new starter alongside Myles Jack next season. Iowa’s Jack Campbell or Alabama’s Henry To’oTo’o could be names to target in Round Two that would fit well next two Jack at the second level of the defense. CB could also stand to be addressed with Pittsburgh’s starters allowing the most explosive pass plays in the league currently. Utah’s Clark Phillips or Mississippi State’s Emmanuel Forbes would be two great options that bring that ball hawking splash play ability to the defensive backfield that Pittsburgh sorely needs.

-Two interceptions
-One pick-six
-One blocked kick
-One PBU

There are plenty of ways Pittsburgh can go about addressing their roster with the added draft selection they acquired for Chase Claypool. It will be up to Omar Khan, Andy Weidl, and company to allocate their resources in the draft to add the best talent to compliment what they do in free agency in hopes of helping this team return to relevance in 2023. Regardless of which way they approach this undertaking, the Steelers are armed with valuable assets to add players to this roster to address positions of need and inject some much-needed talent to a roster that already has added a bunch of promising young pieces in recent draft classes.

What are your thoughts on the Chase Claypool trade? Do you think Pittsburgh is in prime position to add some talented player to their roster via the draft with the draft capital they currently have? What positions would you address to improve Pittsburgh’s roster, and what players would you target? Please leave your thoughts in the comments section below and thanks again for reading!