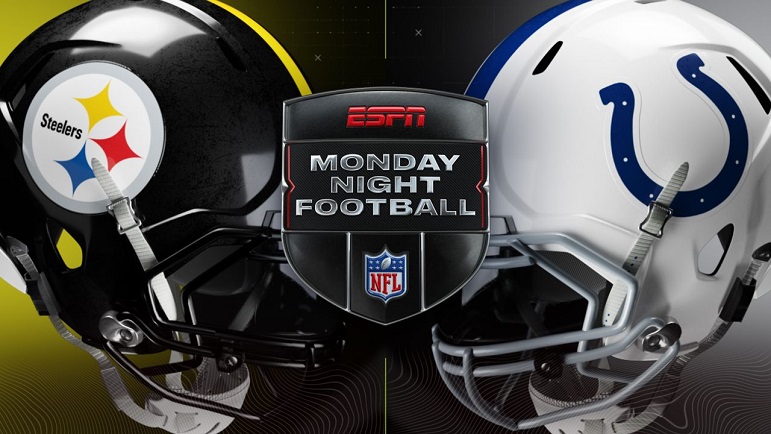 The Pittsburgh Steelers played one of their best halves of the season and lead 16-3. The Indianapolis Colts get the ball back at the top of the second half, so this could become a one possession game in a hurry if the Steelers aren’t careful.

Ironic that the last play of the 1st half was a good special teams play by the Steelers. The first play of the 2nd half was a very, very bad one. A kick returned 89 yards into the red zone. Connor Heyward narrowly prevented the touchdown with a shoestring tackle.

The Colts quickly got into 1st and goal. On 1st, Jonathan Taylor fell forward for a touchdown. 16-10 Steelers.

And just like that the Steelers dominant first half is reduced to a 6 point game. The Steelers have not been able to put opponents away when they have a lead this year.

Najee Harris has an abdominal injury and will not return. The Steelers go three-and-out. Their first such occasion of the night.

So far it is night and day between the two halves for the Colts’ offense. Seven plays for 53 yards.

On 3rd and 1 in field goal range, the Steelers defense stuffed Jonathan Taylor for no gain. The Colts line up to go for it instead of making it a three point game with the field goal. 4th and 1, Matt Ryan dove over the pile for the first down.

1st and 10 on Pittsburgh’s 34, a deep pass complete to Mo-Alie Cox. Defensive holding called, but declined. The Colts are now very near the red zone.

Another 4th and 1 opportunity upcoming this time from Pittsburgh’s 19 yard line.

Nice job by Devin Bush to match the crosser and break up the throw. #Steelers

The Colts opt to kick the field goal. Colts fans booing Jeff Saturday. A bit odd to let up now after going for it earlier. The field goal was good, but Cam Sutton was offsides. 1st down for the Colts. Critical special teams errors are becoming the story of this ball game for the Steelers.

Another defensive penalty gives the Colts 1st and goal from the 1 yard line. The Colts fumble the handoff on the exchange and Chris Wormley recovered.

The Steelers get the ball on their own 5 yard line or so.

Benny Snell on the first two plays picked up 8 yards to set up 3rd and 2. Pickett in shotgun, a nice low pass to Pickens in between defenders, but Pickens dropped the pass. Pressley Harvin’s punt traveled just 40 yards and was fair caught on the Colts’ 45 yard line.

TJ Watt forced a fumble on 1st down, but it went out of bounds for a gain of 16.

Matt Ryan to Woods for another 28 yards and the Colts are right back into 1st and goal after the fumble debacle. This couldn’t be more night and day from the flow of the first half.

Just like that, the Colts take their first lead of the night. Wow.

On 1st and 10, Pickett incomplete intended for Pickens. On 2nd down, Benny Snell picked up just one yard. 3rd and 9 on what feels like the most important play of the game. This thing could start to get ugly if the Steelers allow it to.

On 3rd and 9, Pickett goes back to Pickens and a great catch in traffic. Converted for a new set of downs. Kenny Pickett was roughed on the play a bit too so 15 yards were tacked on. Gunner Olszewski went end around for 9 yards. 2nd and 1, Benny Snell rushed for 13 yards. The Steelers are approaching the red zone and well within go-ahead field goal range.

The TE screen was swallowed up behind the line for a loss of 4. On 2nd and 14, Diontae Johnson took what could have been a first down and juked his way to a modest gain. 3rd and short, Kenny Pickett with a perfect throw to Pat Freiermuth on the shallow out route for a gain of 17. 1st and goal, Derek Watt caught the shovel pass for a gain of just 1. On 2nd, Diontae Johnson dropped the touchdown and Steven Sims was injured on the play. Can’t put the lack of touchdowns on Kenny Pickett at this point.

Steven Sims appears to be okay after that injury.

Benny Snell took the ball on 3rd and goal and was untouched into the end zone. Touchdown. Pickett to Pickens in the back of the endzone for the two point conversion. 24-17 Steelers.

Arthur Maulet in for the sack. A loss of 5 on 2nd and 9. 3rd and 14, a gain of just 6. The Colts should be punting and Kenny Pickett and the offense will get their first try at putting the game away.

The Steelers take over on their own 27 yard line.

On the first two plays, Benny Snell picked up 9 yards on the ground. On 3rd and short, Derek Watt gained 4 yards on the fullback dive to convert.

Kenny Pickett was sacked on 2nd down to set up 3rd and 13. The Steelers gain just 6 yards on a short pass to Benny Snell. Pressley Harvin’s punt was downed at the 7 yard line. A good time for a 50 yard punt.

The Colts must go 93 yards on this drive to tie up the game. Michael Pittman won the 50/50 ball for a deep completion. A gain of 28 and the Colts are off to a nice start. Levi Wallace banged up on the play. Another nice completion to Jehlani Woods puts the Colts in Steelers’ territory. Levi Wallace was pulled from the game by the officials due to possible concussion concerns.

On 3rd and 6, Minkah Fitzpatrick came in like he was shot out of a cannon to tackle the catch. 4th and 2 after the two minute warning.

Levi Wallace back out on the field after a concussion protocol check on the sideline. TJ Watt tipped the ball at the line of scrimmage, but Pittman still caught it for a first down. Unlucky bounce there.

On 1st and 10, Alex Highsmith got the strip sack. A loss of yardage and the clock running. That is exactly the type of play that was needed. On 2nd and 17, Matt Ryan scrambled for 14 yards. 3rd and 3, Alex Highsmith made the tackle backside and a timeout taken. 00:30 remaining with two timeouts. 4th and 3, the pass is incomplete. Cam Heyward brought the pressure and Cam Sutton and Minkah Fitzpatrick teamed up to force the incompletion.

Kenny Pickett took a knee to win the game. Steelers advance to 4-7. Some tiny semblance of a playoff chance remains with the Atlanta Falcons on the schedule next week. I will be present at that game, so I will catch you guys on the game thread in a couple weeks. Thank you for joining!