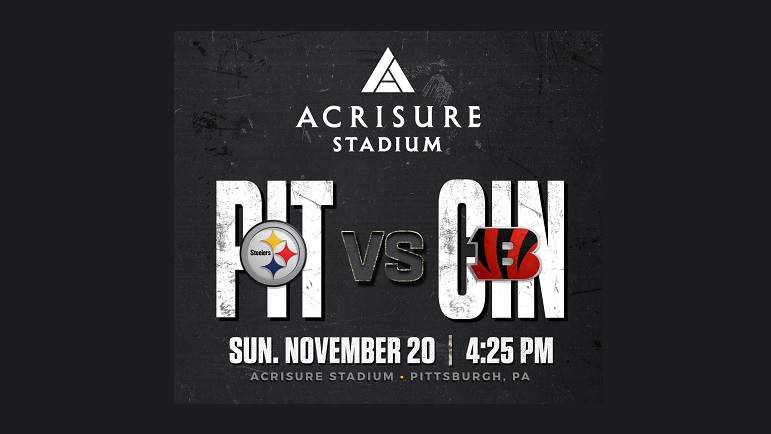 Thank you for joining us on Steelers Depot for another game thread. This week, another chapter will be written in rivalry between the Steelers and their AFC North foes, the Cincinnati Bengals. The Steelers bested the Bengals in week one of this season behind a 7 sack, 5 turnover performance for Joe Burrow.

The Steelers have cooled off their sack totals in a big way since then with TJ Watt out injured for much of that time, but Pittsburgh’s defense is as healthy as it has been all season entering this week. Meanwhile, the Bengals return DJ Reader along their defensive front, but will be missing Ja’Marr Chase and a few other contributors on their defense.

Refresh the page throughout the game for curated tweets, video highlights and more. Also, check out the comment section at the bottom of the page where fans gather each week to discuss the game in real time.

#1 concern/matchup. How the Steelers handle the blitz (or illusion of the blitz) on 3rd and 5+. Bengals have been running a lot of sim/Cover 0 looks. They'll rush, they'll drop, they'll mix and match.

LBs are solid with Pratt, Wilson, and Davis-Gaither (replaces Pratt in passing situations). Very good safety tandem of Bell/Bates. Bell with four picks. Mix of coverages. See a lot of C2 in 2×2 formations.

No WR Ja'Marr Chase but still weapons in Higgins and Boyd. Trent Taylor #3 WR used in jet run game out of stacked/reduced looks. Burrow will take his shot at any 1v1 matchup. Imagine Pittsburgh plays eight in box. CBs on outside must hold up.

Check out the defensive scouting report from @J_Heits and the offensive breakdown from @ByJoshCarney. https://t.co/GZfRit4jkyhttps://t.co/AMrYKw7UEz

Chase Claypool and the Chicago Bears dropped another game, so the Steelers’ draft pick from them is currently the 35th overall pick. Chase Claypool has 5 catches for 32 yards in three games with the Bears.

The Bengals start the game with a quick three-and-out. The punt was muffed by Steven Sims. He nearly got tackled for a safety, but ran it out to the 5 yard line.

The Steelers with a quick three-and-out of their own. Pressley Harvin’s punt went 56 yards, but was returned 11 yards to the Bengals’ 43. The Bengals will start with good field position.

Hayden Hurst split the zone with Myles Jack getting burned across the middle for 21 yards on 1st down.

1st and 10, Joe Mixon up the middle for 3 yards. TJ Watt applied pressure on 2nd down to force an incompletion. The Bengals call for their first timeout before the third down attempt. On 3rd and 6, Samaje Perine ran for about 5, just a yard short. 45 yard field goal attempt and the field goal is good. 3-0 Bengals.

Steven Sims bounced back with a 22 yard return to the Steelers’ 35. Good position to start the half.

On 1st and 10, Najee Harris rushed up the middle for 5 yards. On 2nd, a 22 yard completion to George Pickens. A nicely placed ball on that deep ball.

On 1st and 10, Najee Harris got stood up in the middle of the line for a gain of three. On 2nd and 7, a failed shovel pass to Zach Gentry makes it 3rd and 8. Pickett bought time against a free rusher and delivered a pass to Jaylen Warren who picked up the first down. Warren maybe a bit banged up on the play.

On 3rd down Najee Harris couldn’t quite secure the pass in heavy traffic with the defender. Matthew Wright comes out to kick the field goal and its good. 3-3 Even.

Cameron Heyward darted into the backfield right off the snap for the tackle for loss on 1st. A Robert Spillane facemasking call bail the Bengals out of 4th and short.

An explosive play for Joe Mixon puts the Bengals in the red zone and Samaje Perine runs up the sideline for the touchdown. 10-3 Bengals.

The kickoff was returned by Steven Sims 37 yards to the 44 yard line. He is definitely making up for that earlier muffed punt.

On 1st down, the pass fell incomplete. Pickett needed to put that ball out in front of Pickens. It was nearly picked off. On 2nd and 10, Harris rushed for three. The Steelers are at the midfield mark with 3rd and 7.

On 3rd and 7, Pickett connected with Pat Freiermuth for the 1st down. Excellent job reading the defense for Pickett.

Najee Harris went up the middle for a gain of 7. Trey Hendrickson was injured on the play for the Bengals. That is no small loss for the Cincinnati defense should he be unable to return.

Back to back plays Kenny Pickett tried to rush. On 2nd he was stuffed for no gain. On 3rd he converted with a 14 yard race to the sideline. Pat Freiermuth sealed Eli Apple to make that happen.

On 1st and 10, Pickett missed Freiermuth who was wide open in the middle of the defense. 2nd and 10, Najee Harris found himself in a one-on-one and leapt the defender for a touchdown! 10-10 Even.

Good news? The #Steelers finally have a touchdown of more than 15 yards on the year. Only team that didn’t.

The Bengals ran the kickoff back to the 27, but holding backed them up to the 9 yard line.

On 1st down, Robert Spillane made the tackle for minimal gain. TJ Watt and Myles Jack tackled Burrow to make it 3rd and 4. On 3rd, Tee Higgins converted with Terrell Edmunds in coverage. Watt nearly got his hand in the passing lane there.

1st and 10, Joe Mixon picked up 6 on the ground. Cameron Sutton beat one on one against Tee Higgins for another conversion. Higgins is started to pickup steam.

On 1st and 10 now in Steelers territory, Mixon caught the dumpoff pass for a gain of 7. Mixon with another gain of 7 yards to convert on 2nd.

1st and 10, just outside the redzone, Burrow complete to Perine for a gain of 6. On 2nd and 4, Higgins picked up another 12.

Another 1st down, now from the 11 yard line, Samaje Perine in for another touchdown similar to the first one running up the right sideline. 17-10 Bengals.

The defense needs to make some adjustments at halftime. Very little pressure and Burrow is starting to pickup steam. 11 straight completions for the Bengals.

Steven Sims just keeps having good returns. This time getting out to the 34 yard line on the kickoff. Much needed to put the offense in good positions.

On 1st and 10, Pat Freiermuth couldn’t quite pull in the pass. That is a drop for Freiermuth. Would have been a big gain. 2nd and 10, Najee Harris managed to gain about 4 yards on what could have been a loss. Defensive holding called on Flowers of the Bengals. Automatic first down.

Najee Harris found a hole for 6 yards on 1st down. He seems to be much more decisive finding a hole and hitting it this week. On 2nd and 4, Harris falls forward for 3 on the outside zone run. 3rd and 1, Diontae Johnson on the end around for a yard and the conversion.

Kenny Pickett couldn’t quite get his feet re-set after escaping pressure. Pickens was wide open in the end zone, but it was way off target. Holding on Dan Moore, so it wouldn’t have mattered anyways.

On 1st and 20, Diontae Johnson made up most of the penalty yardage. 2nd and 12, back to Johnson for  more yards. 3rd and 5 is manageable, but they are in no-man’s land outside of field goal range. On 3rd and 4, Pickett took his deep shot to Pickens up the right sideline. it was incomplete, but Pickens drew a penalty. DPI makes it 1st and 10 from the 25 yard line.

On 1st and 10, Najee Harris rushed for just one yard.

2nd and 9, Diontae Johnson received the pass short in the middle of the field for a 5 yard gain. With the clock running the Bengals call their 2nd timeout. Kenny Pickett was called for false start. 3rd and 9, Kenny Pickett found George Pickens in the end zone. Touchdown! Delay of game backs up the extra point, but Wright still converts. 17-17 Even.

Marcus Allen shutdown the kickoff return with a nice tackle at the 24 yard line. An incompletion on 1st down with TJ Watt bringing pressure. On 2nd, Burrow right on the money to Tee Higgins in traffic to convert.

The clock is ticking, 1:10 remaining at the snap, Burrow’s pass fell incomplete. 2nd and 10, Tee Higgins caught the ball to convert but was injured on the play.

The clock is ticking. Burrow incomplete with 00:35 remaining. On 2nd and 10, Burrow threw a low pass, but Levi Wallace dove to intercept the ball. The interception is being reviewed. Looks good to me.

Steelers should have the ball back with 00:31 and three timeouts on their own 44 yard line. Interception confirmed.

False start on Diontae Johnson. 1st and 15, Najee Harris received the pass for a 12 yard gain. 2nd and 3 with 00:24 remaining, Pickett to Freiermuth for 14 yards and a conversion. He also managed to get out of bounds.

00:18 remaining, two timeouts. 1st and 10, Pickett nearly tucked it to run, but he hit Pat Freiermuth who fought for extra yardage. 27 yards on the play. Timeout kills the clock at 00:09.

Very nice half by Pickett #Steelers

Pressure kills the play and the final timeout sets up the chip shot field goal for Matthew Wright. The Bengals ice Wright before the field goal attempt. The attempt was good. 20-17 Steelers.