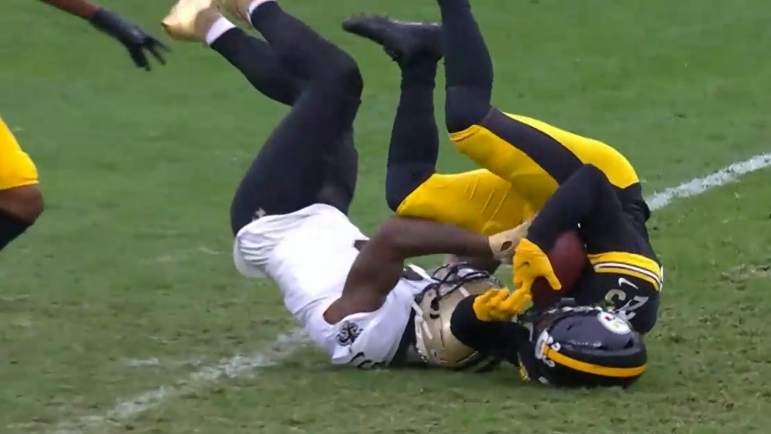 Reasoning: The veteran safety not only made his 2022 and Steelers debut on Sunday after spending half the season on the Reserve/Injured List, he had the opportunity to start due to injury and played every snap, making an impact with a key interception.

Circumstances beyond on-field performance helped make Damontae Kazee affordable for the Steelers this offseason, signing the veteran starting safety to a minimum-value qualifying contract after the 2022 NFL Draft.

While there were no indications that he was going to take anybody’s starting job, there always existed the possibility that he would see a significant role in the secondary. They were planning for it during the preseason when he broke his forearm in the finale, which led to his spending the first eight games on the shelf.

Not only did he get to play on Sunday, however, thanks to Minkah Fitzpatrick’s insubordinate appendix, he got to start the game, getting the nod over second-year Tre Norwood. While the defense was only on the field for 47 snaps across 21 minutes of playing time, he played every one of those snaps.

And they were significant, quality snaps, on the whole. Sure, there were some signs of a player who hadn’t played in months, and never in the scheme he was playing in, but you could tell that he has been doing this for a while.

It was a heady play to snag the interception late in the game off of a deflection, and that was key. Going in, he said that he knew he was going to have to “be a ball guy” for the secondary, which had been lacking that playmaking for most of the year.

He also established his physical presence, even if not always in the most helpful manner. He did draw an unnecessary roughness penalty late in the first half, although it came on the sideline as he was separating the player from the ball to force an incompletion. He tried to play it cleanly, but not clean enough for the officials. Perhaps next time he hits it right.