Today I wanted to look at how pass defenses have fared through the 2022 season thus far, using success rates by down, game halves, and weekly views as well. Let’s jump right in. 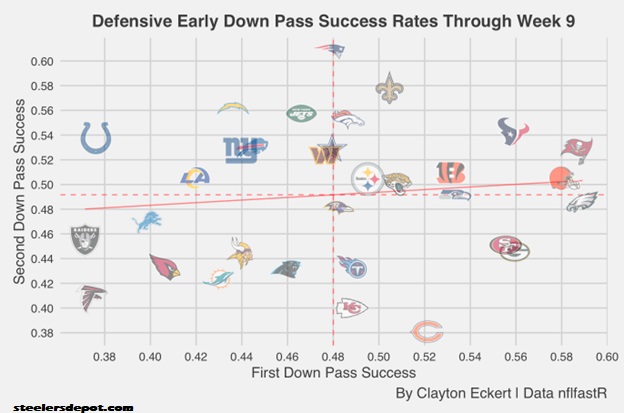 The Pittsburgh Steelers defense is one of only eight teams that clearly land above the mean on first and second down. On first down, their success rate is 49.5% which ranks 12th in the NFL. This is obviously the most frequent down, so their high rank here is impressive, especially considering the absence of edge rusher T.J. Watt for much of the season, along with many injuries in the secondary. Their second down success rate is 50.4% which ranks 16th, so Pittsburgh’s defense is within the top half of the league in success rates when defending the pass on early downs so far this season.

What about late downs, where third and fourth downs that do not pick up a first down are considered a success? 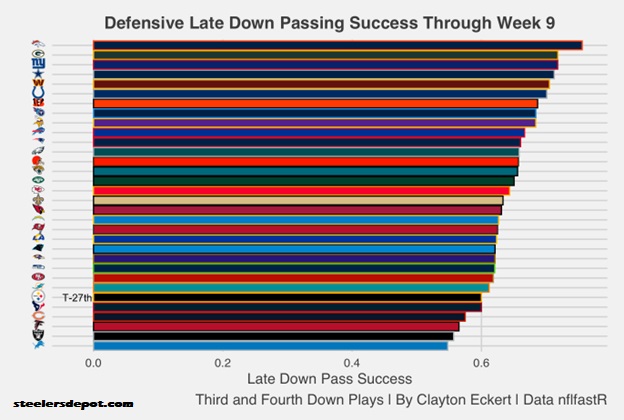 This is where the defense has struggled, tying for 27th when defending third and fourth down passes. Pittsburgh obviously has missed the presence of Watt, one of the best at making huge plays in key situations in the pass rush. Hopefully with his return, we get a more familiar and dominant rush that has been severely lacking, playing right into the coverage’s hands for hopeful and needed improvements in money situations.

Here are the total success rates, now that we’ve seen the rates by down: 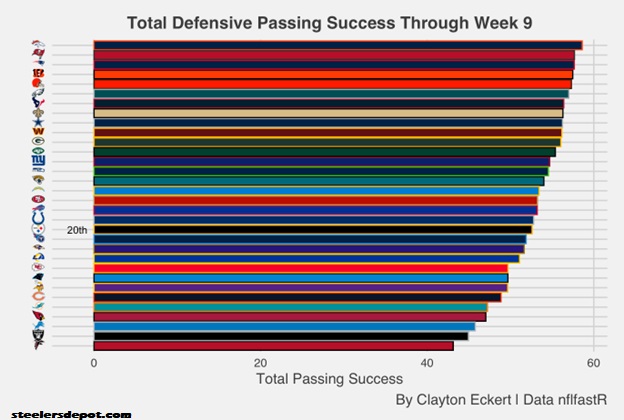 Overall, Pittsburgh’s defense ranks 20th in the league in total success rate at 52.6%. So, progressively by down they have been worse, which is frustrating considering the expectation and predictability of passing goes up. Unable to get off the field in many situations, allowing the opposition to control the scoreboard, meanwhile limiting the struggling offenses’ opportunities overall.

I was also curious to see how defenses have performed by half: 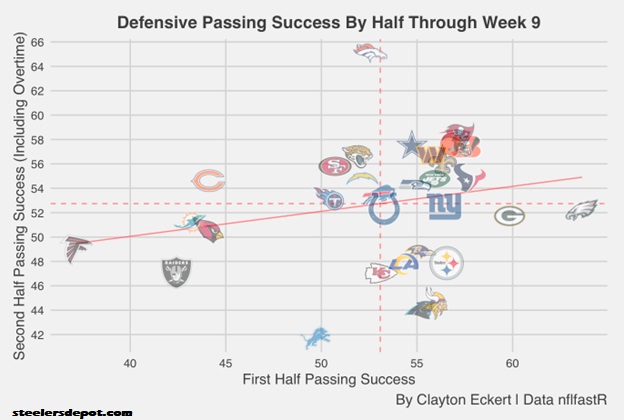 This visual really highlights several NFL teams having success in the first half, with 21 teams at or above the mean. Pittsburgh’s defense is one of them, with an impressive 56.5% success rate in the first half that ranks eighth in the league. As games have worn on though, they have been well below average, with a 47.9% success rate that ranks 26th. So, late downs and late in games surely need to improve with Watt’s return and a lighter schedule.

Speaking of which, it’s interesting to look at the upcoming schedule of opposing defenses. The Saints are above average on early downs, including a strong second rank on second down. They are middle of the pack on late downs, and have a solid eighth rank in total success. New Orleans is also above the mean throughout the game so far this season, ranking 10th in the first half and ninth in the second half. The Bengals follow in week 11, and fare well across the board with an 8th rank on first down, 13th on second, and seventh on late downs for an impressive fourth rank in total success. They also land above the mean in both halves, along with a couple other teams with the best balance throughout the game, including the Browns within the division.

To wrap up, let’s look at a weekly breakdown for added context: 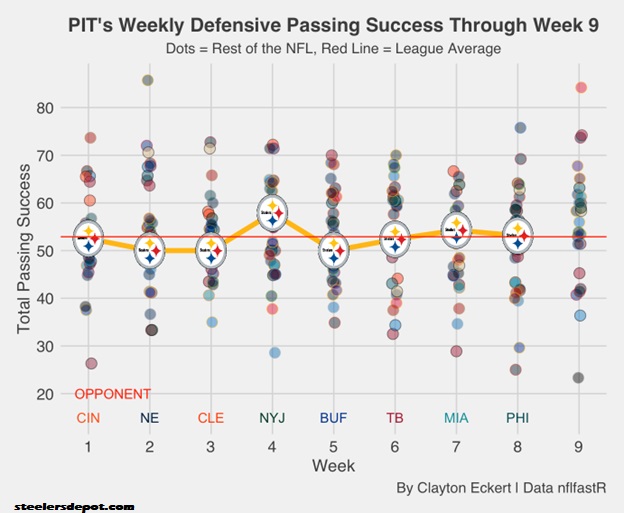 Looking by week, we can see five of their eight games have been below league average but encouragingly never strayed below 50%. Their best overall performance in the success rates was in week four against the Jets, with a 57.9% total success rate. Their worst performances came in week two (Patriots), three (Browns), and five (Bills). A pattern in each of those losses was Pittsburgh’s defense struggling on an early down, with their worst first down success rate of 22.2% against the Browns really sticking out. Against the Patriots they were 40% on first down, which was third worse to a 33.3% effort against the Dolphins in week seven. Second down and on is where the Bills pounded them in the blowout, with only a 38.5% success rate on second down (worst of 2022), and second worst mark on late downs. Pittsburgh’s lowest mark on late downs came in their last game against the Eagles, where they were only successful on 37.5% of the crucial plays in another blowout loss. Hopefully we get more dominant performances the remainder of the way, as opposed to largely hovering around average.

What are your thoughts of the Steelers pass defense through week nine? Are you optimistic for a vast and needed improvement post-bye week? Thanks for reading and let me know your thoughts in the comments!