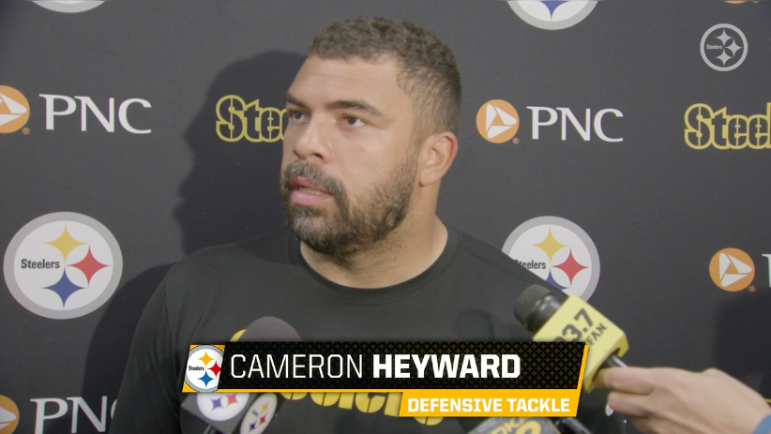 It was a common sight in Week 5 around the NFL for defensive players getting to the quarterback for a sack. Instead of celebrating a possible game-changing play, defenders were staring in disbelief at flags thrown for a roughing the passer penalty.

Atlanta Falcons defensive tackle Grady Jarrett seemingly had a game-sealing sack on Tampa Bay’s Tom Brady in the fourth quarter before being called for a roughing the passer, eventually helping the Buccaneers go on to win the game. Then, Kansas City’s Chris Jones had a strip-sack on Las Vegas’ Derek Carr Monday night, but was called for roughing the passer on a play in which he couldn’t do anything differently.

Both plays ultimately led to a ton of backlash from defenders and media members around the league.

Pittsburgh Steelers defensive tackle and team captain Cameron Heyward was the latest to speak out on the inconsistent enforcement of a confusing rule, stating to reporters Thursday during his weekly media session that he understands the league is trying to protect the passer, but asked who is protecting the defenders in the end when it comes to this type of stuff on a down by down basis.

“I think it was interesting if you watch that game versus Atlanta, everybody likes to pay attention to that one play, but before that play, there was a call where they could have called, a roughing the passer where he went into his [Tom Brady’s] legs. So I felt like the ref was trying to make up a call,” Heyward stated to reporters Thursday, according to video via Steelers.com. “Sometimes that happens, but you know, the Chris Jones one I was more disgusted with because we’re being taught we need to make a play on the ball. And Chris Jones makes a play on the ball and has the ball in his hand and falls on top of Derek Carr.

“I don’t know what else you could ask him to do. …That’s teach tape right there. Like for any defensive lineman, you should be doing that. So, I understand we wanna protect quarterbacks, but who’s protecting us?”

This roughing the passer call is trash!!! Do you want Chris Jones to lay a pillow down and tuck him in? #ChiefsKingdom pic.twitter.com/GS3rwYI2aA

The league has gone to great lengths to protect the quarterbacks who, rightly or wrongly, are the foundation of the league at this point in a star-driven game. They get people to tune in, so of course the league will want those stars healthy and on the field as much as possible.

It’s gone a bit too far, though. As Heyward points out, Jones did absolutely nothing wrong other than landing on top of Carr from a position where he physically couldn’t have done anything else, and yet was still called for the roughing the passer, wiping out the turnover.

Jarrett avoided slamming down Brady like Tua Tagovailoa was on Thursday Night Football two weeks ago, resulting in a major concussion. Still, that wasn’t safe enough, resulting in a game-changing flag.

This was a third down sack by Grady Jarrett. He did everything you’re supposed to do, including not roughing the passer.

The result: roughing the passer, fresh set of downs.

The league wants the quarterbacks to be protected, which has even draw the ire of former quarterbacks, including Troy Aikman, yet they won’t go to great lengths to change some rules to protect defenders, including the cutblock inside the tackle box.

It’s inconsistently enforced and is a subjective call at this point. It needs changed. It’s affecting the game in worse ways than the league could have even envisioned when the rules were tweaked.