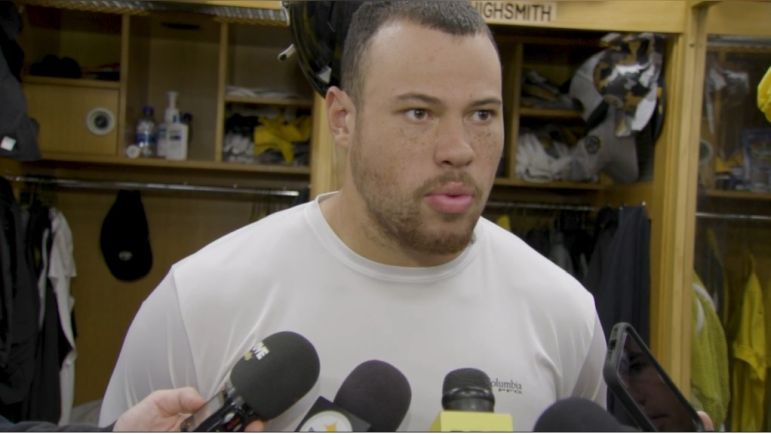 The Pittsburgh Steelers’ defense certainly deserves credit for tightening up since getting boat raced by the Buffalo Bills earlier this month, blown out 38-3 in one of the team’s worst showings in decades. Since, they held Tom Brady and the Tampa Bay Buccaneers to just 18 points while the Miami Dolphins’ potent offense scored just 16 Sunday night. But Alex Highsmith knows there’s always rooms for improvement.

The start of Sunday’s game certainly didn’t feel like it’d end allowing just 16 points. Miami opened the game with a touchdown drive, carving up the Steelers’ defense before QB Tua Tagovailoa broke the pocket and found RB Raheem Mostert open in the left flat for an eight-yard touchdown. By the end of the first quarter, Miami held a commanding 13-0 lead, dominating time of possession. Going forward, Highsmith said the Steelers need to start quicker.

“We just started off so slow in the Miami game. We just gotta come out and start fast.”

The first quarter has told the story of the Steelers’ season. They’re 2-0 when leading after the first 15 minutes this season, up 10-3 against the Bengals in the opener and 7-3 over the Buccaneers two weeks ago. Of course, they’re also now 0-5 when they don’t have a first quarter lead. Sunday night, the offense had chances but couldn’t close the gap over Miami’s fast start.

It’ll be a similar story and concern this weekend against the Philadelphia Eagles. They come into the NFL with one of the league’s most potent offenses with a similar style as Miami. Speed at receiver, athleticism at quarterback, a varied and multiple offense that forces defenses to be disciplined. Digging into the numbers a bit deeper, the Eagles are a one-quarter offense. They’re not a strong first quarter team but are an elite second quarter unit. Here’s the Eagles’ quarter-by-quarter scoring marks this season.

They’re one of the league’s worst offenses in the first, third, and fourth quarters while being the best in the second, scoring 63 more points in the second quarter than they have in all the others combined. Not only are they #1 in quarter #2, they lead second place by nearly 30 points. One of the oddest stats that apparently speaks to the team’s ability to adjust. So for Highsmith and the Steelers’ defense, they’ll need to play a strong first half of football this weekend as the team desperately tries to save its season.