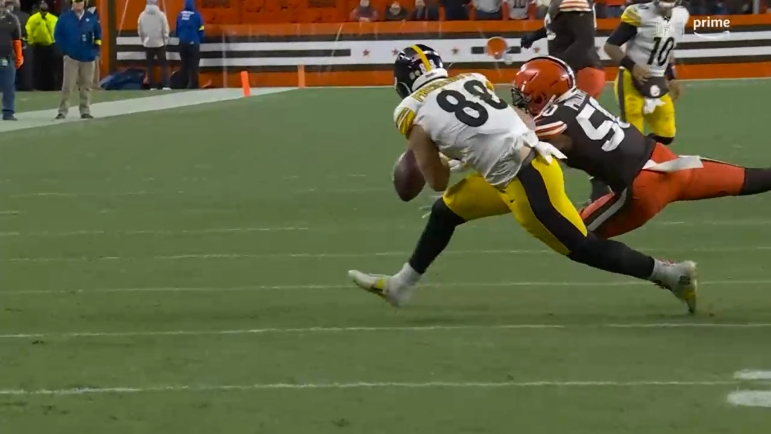 As the Pittsburgh Steelers make their final preparations for their Week 4 duel with the New York Jets, incorporating tight end Pat Freiermuth early and often should be a point of emphasis. Speaking on The Mike Tomlin Show today, Pittsburgh’s head coach touched on the subject of Freiermuth, particularly on why, if any reason at all, he wasn’t used until late in the game versus the Cleveland Browns. More importantly, Tomlin shared his thoughts on Freiermuth’s potential usage coming up against the Jets.

“We always want to use Pat, regardless of circumstance, but you know, it happens over the course of 60 minutes and we don’t push the panic button if it doesn’t happen in the first few minutes. They’ve got some things, several agendas that we manage over the course of a football game, but rest assured that as the game unfolds, particularly in situational ball, Pat’s a significant component of what we do.”

Three games in, Freiermuth has seen inconsistent targets in the early going. Even though the former 2021 second round pick did get ten targets his way in Week 1 (a career-high in the regular season), the looks he’s getting have been decreasing ever since. In the Steelers’ most recent loss, Mitchell Trubisky targeted his tight end just four times, which is pretty low for Freiermuth’s standards. By the game’s conclusion, he managed to only record two catches for 41 yards. One wouldn’t blame Steelers fans for their frustrations regarding this matter. Freiermuth has shown off his big play ability despite Trubisky’s shortcomings, averaging nearly 13 yards per catch (12.7) ahead of the Jets game.

As always, the numbers don’t lie in the NFL. Despite it being only his second season in the NFL, when Freiermuth gets involved often (six or more targets, for example), good things happen for Tomlin’s offense. Since last season, the Steelers have a combined record of 6-3-1 when Freiermuth is targeted more than six times.

Whether it’s a lack of play design or something more subtle, Freiermuth needs more looks from his quarterback. He was averaging nearly 15 yards per reception in Week 1 against the Cincinnati Bengals, as fans will recall, before his targets steadily declined. Just three weeks in, Freiermuth is efficiently moving the chains as well, with six first down conversions to his name (he had 34 all last year). Simply put, he needs the ball more, but just as importantly, the Steelers need to involve him quickly.