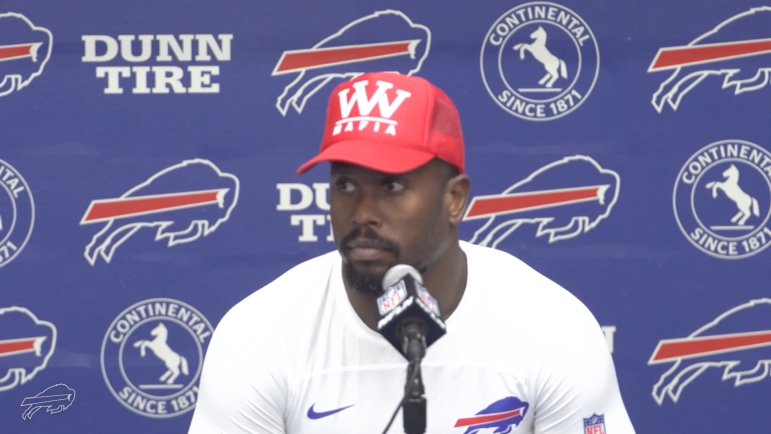 He may or may not have some thoughts about Pittsburgh Steelers rookie quarterback Kenny Pickett acknowledging the fact that his team is being regarded as the underdogs heading into the week five matchup against his Buffalo Bills, but All-Pro edge rusher Von Miller insists he has all the respect in the world for the first-rounder, regardless of his experience level.

“A long time ago I just stopped calling guys rookies and treating guys like rookies”, he told reporters yesterday when he was asked about the prospects of facing a rookie quarterback making his first start. “This is pro sports. Everybody’s a professional, and that’s how I go about it, whether that’s on my team or anybody else’s team”.

We don’t need a laundry list of the names of rookies who have immediately played at a very high level from pretty much their first game, but there are plenty. Everybody grows at their own pace, but being inexperienced at a certain level of competition doesn’t mean you can’t excel and get the better of your veteran opponent. Miller himself had five tackles and a forced fumble in his first game, and then five straight games with at least one sack, so he would know.

“Everybody has been ‘the man’ at some point or another, whether that’s college or maybe it’s high school, but to play at this level, you have that ‘it’ factor”, he said. “You have talent and on paper, you could be the next Hall of Famer”.

Pickett did throw three interceptions on Sunday during his 30 minutes of play, though that included a Hail Mary pass attempt with just seconds to play in a one-score game, which frankly shouldn’t really even count on quarterbacks’ official interception statistics.

He also managed to move the ball on every one of his drives, something that the Steelers were not doing with Mitch Trubisky under center, and he was attempting and making throws that were rare for the offense up to that point.

As Miller points out, they only have 13 passes on tape for them to study. And that was running the gameplan that was set up for Trubisky, not Pickett—the rookie himself even said that he told the team not to change anything because he didn’t want to limit the offense.

This week will be different. Although they will be compiling a gameplan from the same basic set of plays, the actual gameday cheat sheet, so to speak, will be tailored around what he’s comfortable running, what he’s had success hitting in practice. The Steelers are still learning about what the offense is going to be like with him in the starting lineup. Miller and company will have to find out live.