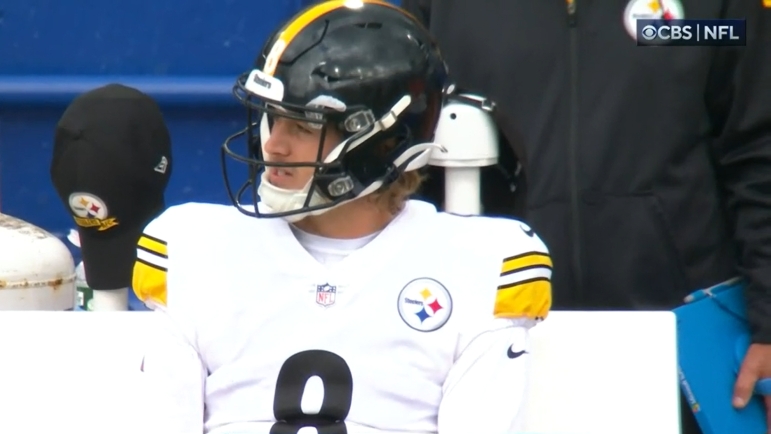 Though Kenny Pickett has only played six quarters of football, it’s still six quarters worth evaluating. As he always does, speaking to reporters Thursday, offensive coordinator Matt Canada was asked to dissect Pickett’s performance.

“I think for a game and a half of football at this level, I think Kenny’s certainly trending in the right direction for us,” he told reporters as transcribed by the team. “Love how hard he plays, love his competitiveness, love his leadership. He’s fighting – he was fighting, obviously, literally – all the way to the end of the game.”

Canada’s comment at the end of course refers to Pickett’s skirmish at the end of the game, dusting up with Bills’ DE Shaq Lawson after a low hit on his final pass of the day. All water under the bridge, and no one is looking for his quarterback to get hurt, but it’s a moment like that that teammates have to respect and appreciate. Though he’s *only* a rookie, Pickett is 24 and was a five-year player in college, rare for first-round quarterbacks who generally declare before their senior season. But Pickett made the right call to return to Pitt for 2021, improve his game, build his stock, and become the 20th pick of the 2022 NFL Draft.

Two games in, Pickett has completed more than two-thirds of his passes, a number that would be higher if he wasn’t hurt by drops, especially in the Bills’ loss. While he has two rushing scores and has used his legs well, he’s still looking for his first passing touchdown. One to a wide receiver would be ideal. Five games in and no Steelers’ wide receiver has caught a touchdown, something that hasn’t happened since 1990.

Like any player, especially a rookie, there’s good and bad and Canada noted there’s always areas to improve.

“The pick he had last week – seems so long ago now – was into the half, probably trying to push it and make
something happen.”

Of course, as we noted, Canada called the same play two out of three plays, with Pickett forcing the throw to what was a previously-open Diontae Johnson. Like any good defense, the Bills caught on, adjusted, and made him pay.

Still, taking the football will be critical the rest of the way. Pittsburgh will face a Bucs’ defense Sunday certainly capable of taking the football away with strong secondary play overall. Pickett will look for his first win, one the Steelers desperately need, in his first home start. Hopefully he and this team can keep moving in the right direction.