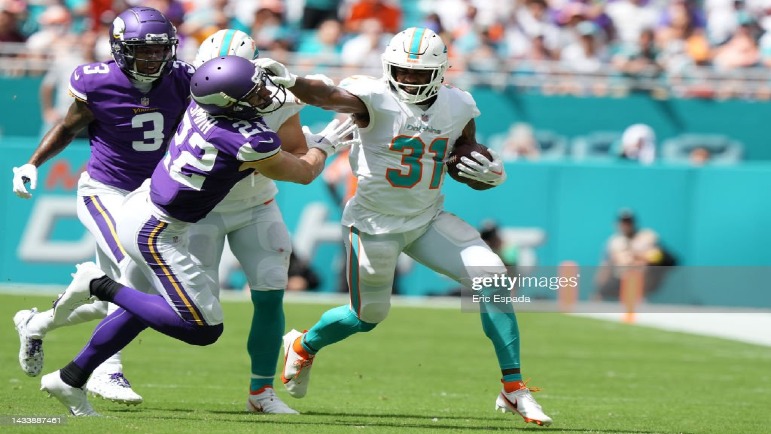 The Miami Dolphins’ new head coach, Mike McDaniel, came over to Miami from the San Francisco 49ers, where he worked with offensive guru and 49ers head coach Kyle Shanahan. In fact, Shanahan and McDaniel’s connection goes back a year further, as in Atlanta McDaniel worked under the future head coach as an offensive assistant before moving to San Francisco with Shanahan 2017.

On his weekly show, The Mike Tomlin Show, Mike Tomlin talked about how the Dolphins use their run game in a running back committee style similar to the 49ers.

“They thoughtfully do running back by committee, but it doesn’t mean that their running game isn’t a significant one” Tomlin said, via the team’s YouTube channel. “Looking at the San Francisco model and looking at what they’re doing there, they just choose to do it by committee to get the bullseye, if you will, off of one particular player to have fresh runners.”

McDaniel has clearly taken what he has learned under Shanahan’s tutelage and applied it to his new team as head coach. While Raheem Mostert, who followed McDaniel from San Francisco to Miami, gets the bulk of the rushing carries, it is not unusual to see Chase Edmunds carry the rock. Edmunds has also received the ball a bit more in the passing game than Mostert has.

This is the complete opposite of how Mike Tomlin handles his running backs. Once Tomlin gets his bell cow, he rides them until the wheels fall off.

A specific example of this that sticks out was back in 2014 when the Steelers signed LeGarrette Blount to split carries with Le’Veon Bell. However, this did not end up being the case, as Bell got almost all of the touches at the running back position which led to Blount famously walking off the field in a game against the Tennessee Titans.

The Steelers have to make sure their defensive rotations are effective enough so that their starters can still be fresh in the fourth quarter when Mike McDaniel may call upon his fresh running backs to pick up crucial yards.