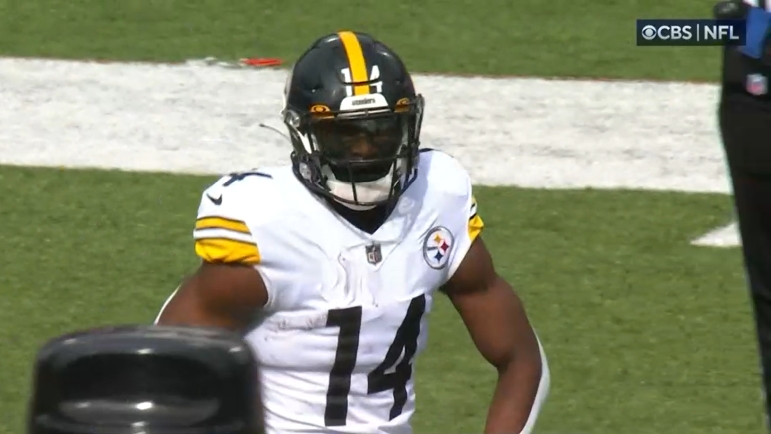 When it comes to positive appraisal of the Pittsburgh Steelers, it often seems that most of the verbiage is left for rookie wide receiver George Pickens. Through seven games, he now leads the team in receiving yardage and became only the fourth player on the team this season to catch a touchdown pass.

A second-round draft pick out of Georgia, he became an almost instantaneous media phenomenon, which a post-draft video of himself standing in front of his television watching himself get drafted going viral and turning into a meme.

Part of his story is that he was regarded as underdrafted, a player with first-round talent who fell—but the reason for his fall could vary. The fact that he was coming off an ACL injury was of course a part of it. but there were plenty of stories about teams having concerns about his character.

One reporter even asked head coach Mike Tomlin about this, referencing this purported pre-draft reputation. “Where do you draw that line with him”, Tomlin was asked, regarding his “physical playing style” and playing “with an edge”. He was not answered favorably.

“I don’t even understand where that’s coming from, man. This guy is doing everything that we ask him to do”, Tomlin said via the team’s website. “He’s playing good ball. A lot of people have incidences in their college background. I’m certainly not going to hold that against him. We did our due diligence. We were completely comfortable with his character. He has displayed that since he’s been here. So, I somewhat resent that”.

Outside of an occasional critique of body language or something of that sort, there hasn’t been much one could say negatively about how Pickens has conducted himself during his rookie season as a professional.

There are certainly no reports about him being a bad teammate in any way, even if he does supposedly like to talk on the practice field. But so do veterans, and most everybody else with talent. He isn’t drawing taunting penalties in games.

I imagine it’s easy to see why Tomlin would resent the question and the manner in which it was framed, “because of the fight and whatnot in his college career”, as the reporter referenced, suggesting that character concerns my have deterred some teams from drafting him.

If there are any teams out there who drafted ahead of the Steelers and passed on Pickens because of character concerns, you can probably bet that they regret that decision at this point. Personally speaking, I’m struggling to gather where the reporter was coming from as well, because he has exhibited nothing thus far that would indicate he is approaching any kind of line that need be drawn with his conduct and playing style. If he pisses a cornerback off for pushing him to the ground, then good. That’s a lesson for the defensive back.