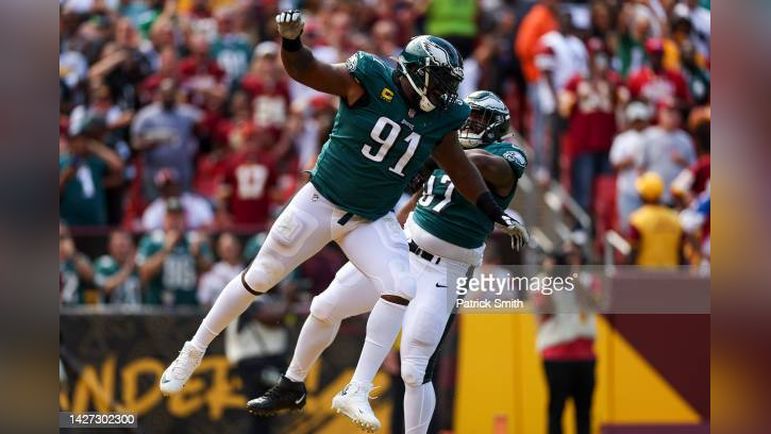 The Philadelphia Eagles’ defense is anchored by their defensive line which consists of veteran and accomplished players such as Fletcher Cox, Brandon Graham and former Pittsburgh Steeler Javon Hargrave.

Today on The Mike Tomlin Show, Steelers head coach Mike Tomlin sat down with Bob Pompeani and discussed the Eagles’ front and its success over the years.

“It’s Fletcher, he’s deserving of the credit, but when you look at their front, it’s Javon, it’s Graham, another gray beard, you know 34, 35 year old guy that spent over a decade in Philadelphia.”

Tomlin continued heaping his praise on the Eagles’ defensive front, specifically when talking about Cox.

Fletcher Cox could very well be enshrined in the Pro Football Hall of Fame one day, and he still isn’t showing too many signs of slowing down. So far this season, Cox has forced a fumble, recorded three sacks and pitched in thirteen tackles.  However, Hargrave is continuing to prove he is a very underrated defensive tackle in the NFL, as he has stats very similar to the more well-known Cox. On the season Hargrave has eleven tackles, one sack, and two fumble recoveries.

For the Steelers to come out of Philadelphia with a win for the first time since before the Chuck Noll era, it will be vital for their young offensive line to handle the grizzled veterans lined up across from them.

Despite the veteran presence and legacy of the Eagles’ defensive line, they have not been perfect. In half of their games Philadelphia has allowed over 100 yards on the ground, including allowing 181 rushing yards from the Detroit Lions in Week 1.

To help out rookie quarterback Kenny Pickett, it would be ideal to get Najee Harris going on the ground. Not having Pickett throw the ball 40+ times would be a recipe for success.

Obviously part of that will rely on the defense slowing down Jalen Hurts and the high-flying Eagles offense. But a good run game could be a way to help out a Steelers’ defense with a couple injuries. If the Steelers can control the clock, it will limit the amount of chances Hurts has to lead his offense down the field.

Football is won in the trenches. The Steelers’ offensive line has a chance to make a statement tomorrow against a defensive line group that has been one of the best in the NFL for years now. Can they win out against Cox, Hargrave, and Graham to help lead Pittsburgh to victory and keep the Steelers’ playoff hopes alive?