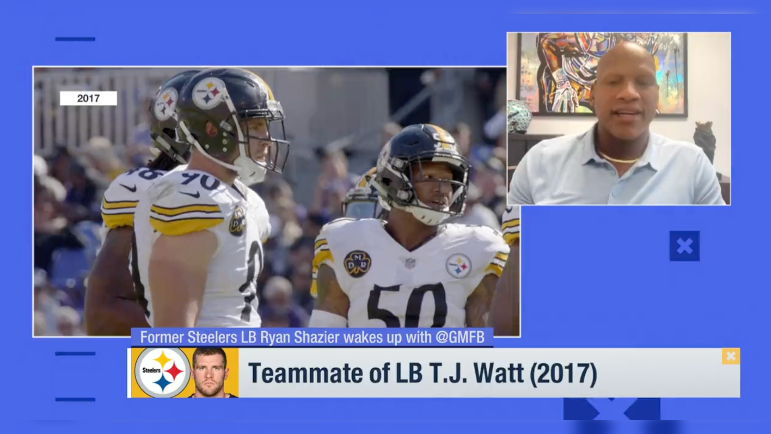 Losing star outside linebacker and reigning Defensive Player of the Year T.J. Watt to an injury in the fourth quarter of the Week 1 overtime win on the road over the Cincinnati Bengals was a massive blow to the Pittsburgh Steelers early in the 2022 season.

A month later, that loss turns out to be even bigger than expected as the Steelers have lost four straight games, the defense has failed to stop anyone in key situations and the pass rush has seemingly completely dried up for the black and gold.

Third-year outside linebacker Alex Highsmith has had his moments as a pass rusher off the edge without Watt, continuing to lead the NFL in sacks through five weeks with 5.5 on the season, but the loss of Watt remains a monumental one for the Steelers, which has changed the whole dynamic of the team, according to former Steelers linebacker Ryan Shazier, who appeared on NFL Network’s Good Morning Football Wednesday to discuss the state of the Steelers.

Along with stating that the Steelers have undoubtedly missed some opportunities in the last few weeks and could easily be 4-1 or 3-2, Shazier touched on the loss of Watt, whom he shared a defensive room with in 2017 in Watt’s rookie season.

“The thing is, with T.J., when you lose someone like him, it just changes the whole dynamic of the team because he applies so much pressure and stress on an offense, it makes the offense gameplan around one guy so much and allows other people to make plays, allows other people to get in position,” Shazier stated on GMFB Wednesday morning, according to video via the GMFB Twitter page. “When somebody like T.J. — one of the best players — is out of the game, now it causes the offense to really see the defense as a whole and can scheme up for the second best guy like a Minkah [Fitzpatrick] or a Cam [Heyward], and then now expecting a third or fourth-best guy to make a play.”

Thanks to former @Steelers LB @RyanShazier for waking up with #GMFB
#HereWeGo pic.twitter.com/AhmT6xWCkW

Losing a player of Watt’s ability and production is a difficult blow, not only for the Steelers, but for any team that would lose a top 3-5 player in the NFL. It’s hard to replace, hard to replicate the production, and hard to stress opposing teams with multiple players trying to pick up the slack, compared to how it’s done when Watt is on the field.

So far, through four weeks, opposing offenses have had a ton of success against the Steelers without Watt. Teams are gameplanning to take Heyward away along the front and are mostly avoiding throwing in the vicinity of Fitzpatrick, forcing others to step up and make plays. They haven’t been able to in the last month or so as the Steelers went from 1-0 and looking like a dominant defense with Watt on the field to 1-4 and hemorrhaging yards and points without him.

As Shazier stated, when a defense has to gameplan for one guy of Watt’s stature, it opens so much up for others on the defense, especially talented players like Heyward, Fitzpatrick, Alex Highsmith, Larry Ogunjobi and more. Now, without Watt, the defense appears woefully average, and it’s not that much of a surprise considering how special Watt is in his own right.

It won’t get any easier with Watt still on the Reserve/Injured List for the time being as Tom Brady and the Tampa Bay Buccaneers are up next on the schedule for the struggling Steelers.