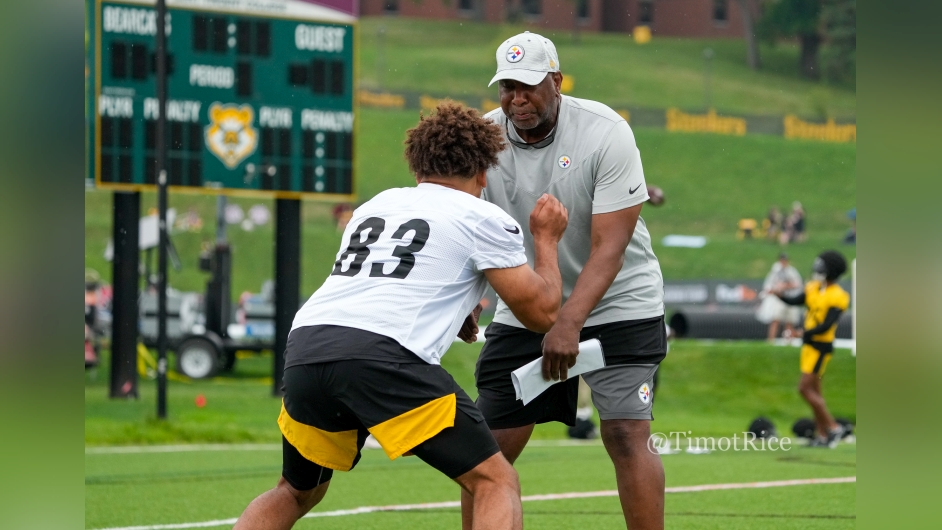 It’s not just Steelers’ players who have gotten hurt this season. It’s coaches too. Though there’s no injury report for the coaching staff, TEs Coach Alfredo Roberts evidently tore his hamstring in Week One against the Cincinnati Bengals. Appearing on Not Just Football With Cam Heyward, Connor and Cam Heyward said the position coach blew out a hammy chasing after Zach Gentry’s screen pass in Week One.

It occurred on Zach Gentry’s 32-yard screen pass in the opener against the Bengals. After Gentry got into the open field, Roberts chased after the ball before his leg gave out on him.

“On the play Gentry caught the screen and he made a guy miss, you see Fredo running down the sideline…his headset comes off, he’s pulling his hamstring.”

Here’s a clip of the moment. If you look on the left side, you can see the moment as Connor described it: Roberts running and then pulling up, grabbing his leg as his headset comes flying off.

According to Connor, Roberts is doing better now.

“But he’s moving around well now. He’s walking and stuff.”

Roberts, 57, has served as the Steelers’ tight ends coach since last season. He’s done a good job inheriting a young group, molding and building up Pat Freiermuth, Zach Gentry, and Heyward. Freiermuth has developed into one of the league’s better young tight ends while Gentry went from roster bubble player to being a solid #2 blocking tight end. Heyward made the roster as a rookie though his playing time so far this season on offense has been minimal.  Over the last two training camps, no group has put in more work than the Steelers’ tight ends with Roberts having the unit go through drills before practice even begins. The results have paid off.

Roberts himself played five years in the NFL, 1988-1992, splitting time between the Dallas Cowboys and Kansas City Chiefs. Prior to being hired by Pittsburgh to replace longtime coach James Daniels, Roberts spent several years with the Chargers.