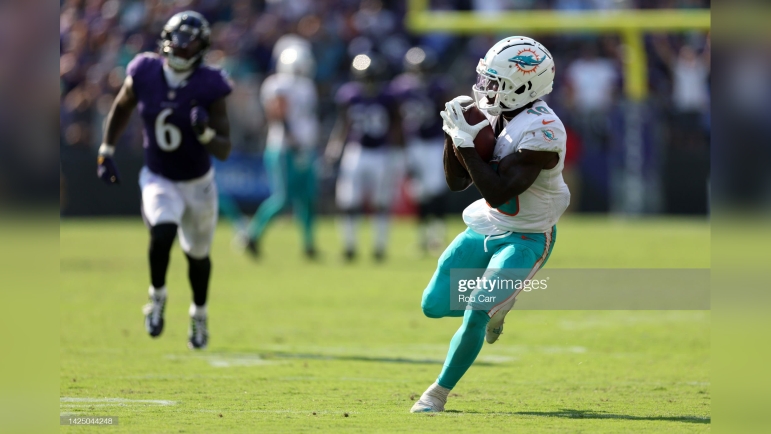 The Miami Dolphins rank in the top 10 in the NFL in explosive passing plays produced as an offense thus far this season with 21. They are second only to the New Orleans Saints, who just played last night, with seven passing plays of 40 yards or more.

And you would have to figure that their ranking would be even better if it were not for the concussion(s) suffered by starting quarterback Tua Tagovailoa, which caused him to miss the past two games and limited him in the two preceding it.

They expect to get their quarterback back on the field for Sunday night’s game for the Pittsburgh Steelers, however, and defensive coordinator Teryl Austin knows that they have to be prepared for—but not intimidated by—the potential for that deep passing game.

“I think any time you play a team with speed like that, you’re obviously aware of it, but you can’t be scared of it”, he told reporters on Thursday, via transcript. “You know what they’re good at and you try to take it away. We’re not going to be able to cover them all”.

At least, the odds don’t favor them succeeding at that task. After all, the Dolphins are averaging more than three explosive passing plays per game, and frankly the Steelers have given up more than their share of them as a defense.

“We’re going to have to put our guys in good positions to maybe kind of catch some of these things on these crossers and deep balls and keep them in front of us”, Austin said, and there are perhaps things that they can build on from last week.

In fact, they were very limited on Sunday because of injuries, with safety Minkah Fitzpatrick and cornerbacks Cameron Sutton, Ahkello Witherspoon, and Levi Wallace all missing the game. Head coach Mike Tomlin talked about how they had to get creative in disguising things while working from a limited menu.

But he also seemed to hint at recognizing what did work and suggesting that those things could carry over to what they will employ as they get their starters back in the secondary. They did allow three explosive passing plays to the Tampa Bay Buccaneers, but managed to hold each of those drives to field goals.

But while Mike Evans and Chris Godwin are very talented receivers, neither is the pure deep threat that Tyreek Hill presents, and now with Tagovailoa back under center, he’s ready to get that keep ball connection going again. Unless the Steelers can stop it, and that includes respecting its threat while not playing scared.